You are at:Home»Spotlight»Solving the unsolvable … and in record time!

The Rubik’s Cube is the biggest selling toy of all time. It has sold over 350 million units and it is believed as many as one in every seven humans have tried to solve it.

But to some people out there, the Rubik’s Cube is not a toy, but an item of competitive sport. A sport where times are measured in hundredths of a second, and where being competitive requires thousands of hours of practice.

In speedcubing, it is not just about solving the cube, but solving it in the fastest time possible. Events are held all over the world, and fame (at least in the cubing fraternity) comes for those that achieve the heights of competitive cubing.

One of the greatest cubers of all time is Melbourne’s own Feliks Zemdegs.

The 23-year-old held, until recently, the world record for the 3 x 3 cube with a time of 4.22 seconds. That is under five seconds to solve a cube that has 519 quintillion possible combinations! 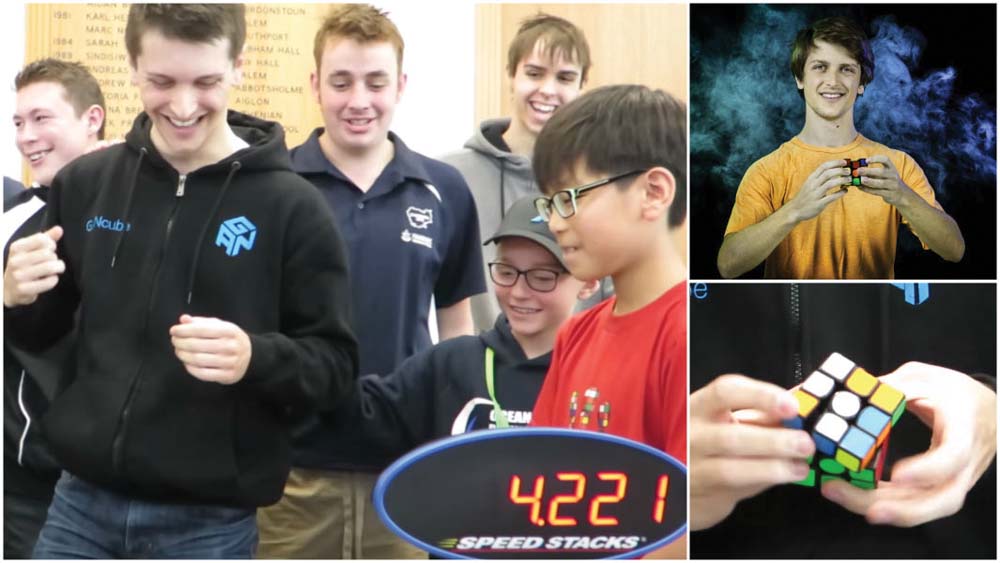 “I’ve been cubing for over ten years,” said Feliks.

“I randomly came across a YouTube video one day of people solving the cube and it intrigued me. I went and bought a cube, and the rest is history!”.

But Feliks’ success was not an overnight thing.

“During high school and the early days at uni, I probably practiced about two hours a day. I am fortunate enough to have been able to keep practising while working and studying part time up until now”.

Feliks is now considered an ambassador of the sport of speedcubing and is always keen to promote its virtues.

“When I came into speedcubing I found it to be a competitive, but very friendly sport,” said Feliks.

“Everybody is there to compete, but it is a supportive community. There is no animosity among competitors”.

At 23-years-old, he is one of the older competitors on the circuit.

“It is definitely a young person’s sport,” said Feliks. “And the kids coming into competitions seem to be getting younger and younger.”

The current world record holder is Chinese national Yusheng Du. He managed to beat Felik’s world record in 2018 with an astounding solve of just 3.47 seconds.

“The single 3.47 was unexpected. Not too many people had heard of him, but now they have!” said Feliks.

“In a single solve, you can get lucky, and skip steps, but it was still a great solve”.

Solve times have come down significantly over the years, with the world record about half of what it was ten years ago.

“It is getting very tight at the top,” said Feliks.

“But there is still room for getting faster.”

Over the last ten years, cubes have become much better than they were, with current speedcubes specifically made for fast solving.

“Probably the biggest technological leap in the last five years would be introduction of magnets into cubes that help speed up the solves,” said Feliks.

“And while the top cubers don’t tend to use Rubik’s Cube brand cubes, Rubik’s Cube still often sponsor events as they are still very good for promoting their brand.”

“Invariably, when someone decides they want to learn to solve the Rubik’s Cube, the first cube they go and buy is a Rubik’s brand”.

Feliks encourages kids to get involved in cubing.

“I would always encourage kids to do physical sports but believe that it is really good for kids development to get into cubing,” said Feliks.

“And parents have often told me that the skills, camaraderie and supportive nature of the cubing community have been great for their kids too.”

Best of all, cubing is an easy sport to get in to. It is just a matter of buying a cube and getting started.

It is as simple as that.

Methods to solve the Rubik’s Cube can be found online with multiple tutorials on YouTube. You can also go to Feliks’ website: Cubeskills.com