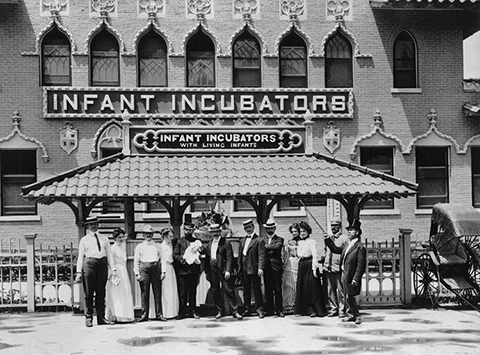 It’s 17 July 1901. You’ve given birth to tiny triplets. Together your three baby daughters weigh as much as one healthy baby.

The doctors tell you there’s a 97 per cent chance they’ll die. Unless you take them to the local Pan-American Exposition in Buffalo.

Take ’em down to the Expo, pop them in this super expensive new-fangled machine called a ‘baby incubator’ and leave them in the charge of the wet nurses and doctors there. They’ll be right as rain in no time.

But I can’t afford all that. I can barely afford to feed them and I don’t have insurance.

Don’t worry, it’ll cost you nothing. They charge an admission fee for people to come through and gawk at the babies. It covers all the medical expenses.

How dreadful! Charging admission fees to gawk at babies!

Ok, let’s have a little chat about peeking into other peoples’ lives. Hands up if you watched Big Brother.

How about the show Miracle Babies or perhaps 23 week babies: The Price of Life, a ‘harrowing’ documentary filmed at the neonatal unit at Birmingham Women’s Hospital. Or maybe RPA, filmed at Sydney’s Royal Prince Alfred Hospital for more than a decade?

Oh yes, they’re just amazing shows. So much fascinating information, and those poor, poor little babies. I was on the edge of my seat waiting to see if they’d survive or not. Isn’t it just incredible what they can do with medical science these days?

Medical science for premmie babies in 1901.

In 1896 the French sent six of their newfangled baby incubators to the Berlin Expo – basically a big fair where countries got together to show off how clever they were with their industrial advancements. They borrowed a few premature babies from a local hospital and put them in the amazing glass boxes.

Incredibly, all six babies survived. The ‘Child Hatchery’ exhibit was a resounding success.

Unfortunately most hospitals were not convinced of the new technology and the incubators weren’t widely used in established neo-natal units until the 1930s.

How did the baby incubators end up at fairs?

The ‘Child Hatchery’ at the Berlin Expo was so popular, Alexandre Lion starting charging an admission fee to try to reduce the crowds.

Another paediatrician, Dr Martin Couney, picked up where Alexandre Lion had left off. Because hospitals weren’t interested, he instead used the admission fee model to fund the building and running of the incubators at exhibitions all over the world before settling into a permanent home at Coney Island.

From 1903 until 1943 Dr Couney and his team of five wet nurses and fifteen medical technicians saved the lives of around 6,500 premature babies.

He charged the public 25 cents each to see the amazing tiny babies in glass boxes. Visitors came back week after week to see how their favourite babies were faring.

After checking in on the Incubator Babies, you could wander further along the Boardwalk and marvel at Violetta the Armless Legless Wonder, Princess WeeWee and Ajax the Sword-Swallower.

Dr Couney was widely criticised for his unorthodox melding of carnival showmanship with medical science.

Whatever the general public thought of his methods, it cannot be denied that his entrepreneurial flair provided the funding and access to medical care which was badly needed and not available elsewhere.

What happened to the triplet baby girls?

You mean Rebecca, Rose, and Rachel Cohen? The ones I told you had a 3 per cent chance of survival? Born on 17 July 1901 and taken to the Buffalo Expo two days later, they survived against all odds thanks to a combination of new medical technology and an innovative way of making it freely available.

Rebecca Bowyer lives in the outer eastern suburbs of Melbourne with her long-suffering husband and two young sons, who are both quite delightful, especially when they are smiling or sleeping. For more funny little stories about raising the little people in your life, visit: www.seeingthelighterside.com  Facebook: Seeing the Lighter Side