Why your baby won’t let you lay him down 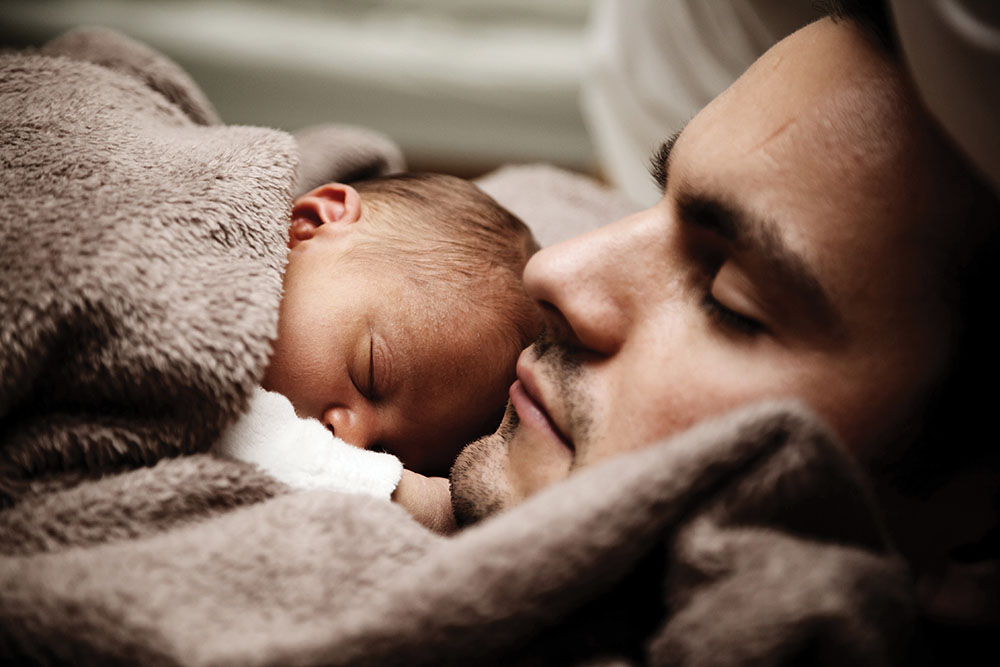 Have you ever held a young baby and touched the palm of their hand with the length of your finger? If that baby was neurologically typical, I’ll bet those little fingers tightly grasped hold of your finger like their life depended on it.

This action is known as the Palmar reflex and once, very long ago, the life of an infant did depend upon it working. You’ll see a similar response from those tiny toes if you tuck your finger underneath them too: they curl in an attempt to hold on.

The secret purpose of this reflex is revealed when you watch other primate mothers with their young: the Palmar reflex is how the infant holds on to its mother as she moves about the forest foraging for food, creating a night nest or following the nomadic pathway of the troop.

This vestigial reflex, remaining long after humans evolved to become (mostly) hairless has always fascinated me. Because it gives insight into the origins of baby carrying – crucial in a species born so incredibly immature as homo sapiens.

Evolution of Man as hunter-gather meant our males needed to become swift as they hunted prey large enough to meet the needs of their tribe. Running while covered in thick hair in hot climates such as what we now call Africa was not efficient, so over time, hair became shorter and finer: it aided evaporation of sweat, keeping the runner cool as he covered long distances. But the female also became increasingly hairless, posing quite a problem for mothers.

With dependent infants unable to walk for a full year after birth and not able to keep up with the nomadic tribe on foot for 3-4 years, a hairless female could no longer rely on the infant clinging to her chest or back. This forced her to use her hands and arms to support her young, making her unable to forage for or carry food.

It was not practical to lay the baby on the ground while she worked. She could cover a large area of ground as she collected seasonal fruits, tubers and other edible plants. Leaving her infant unattended put it at risk of predators seeking out the young and the weak. Attracting predators by crying put the whole tribe at risk. Additionally, the tribe travelled constantly, following the plants and animals which fed them, and the infants needed to be carried in some way.

It is very likely that one of the earliest tools created by Woman was a rudimentary baby carrier. By freeing her hands and allowing her to keep her baby close, she was able to go about her life, keeping her baby close at all times. The baby cried much less, if at all.

However, being able to securely hold her infant was only part of the story. She needed to be motivated to do so. It is hard work carrying a growing child, even in a carrier made from animal skins or plant materials. A mother would be tempted to put the baby down while she worked – but the risk of losing the infant to everything from carnivorous animals to swarming insects was too high. The investment in human children is great: it involves several years of intense maternal care before an infant grows to be a child able to work alongside the adults to support the community. Infant mortality is a great price to pay for indifferent parenting: so the maternal bond needed to be strong. She had to want to keep her baby close. She needed the cry of her infant to distress her and the touch of her baby to reassure and comfort her.

Traditional communities have kept babies close to their mothers day and night, through practices we now call babywearing and bed-sharing, as a survival technique. The mother is driven to protect her child, the child is driven to be close to the mother. And so the cry of a baby – ancient or modern – is a distress call. The mother responds quickly as stress hormones are released in her body, matching those of her baby. The cry is loud and urgent, and the mother instinctively holds the baby close, sshing and calming it to stop crying. Other females in the tribe are also driven to quieten and comfort the baby – while the males feel an urgent need for the child to be quiet and reduce the risk to the whole unit.

Our babies are born expecting to spend their days nestled against their mother, between her breasts in the early months, enabling the frequent feeds at the breast they need. Later, they are carried on her back as she rhythmically goes about her daily tasks. At night, they sleep in constant contact, side by side, with the breast accessible as needed.

Around the world, this is still how mothers and babies live. Except in the modern, post-industrial cities we call the “developed world”.

Our poor “stone-age babies in a space-age world” , as the wonderful Dr James McKenna describes them, still want to spend all day in an upright position nestled directly between the mother’s breasts, never laid on their backs, never away from body contact. But their conflicted space-age mothers in a stone-age body are urged to put the baby aside for the bulk of their day so they can do other things, and despair the baby who cries in distress whenever laid in his bed, whether awake or in a light sleep, and spends most of her time fruitlessly trying to do so.

Because society might have evolved but humanity has not.

Yvette O’Dowd probably isn’t your typical grandmother. This purple-haired mother of three and granny of one has been a breastfeeding counsellor for more than 20 years, runs breastfeeding education classes for parents expecting twins and more, facilitates local babywearing and natural parenting groups and writes for a popular parenting website.

Yvette lives in her Frankston home with her husband and son. Her daughters and their families live nearby. In her spare time, Yvette is a keen photographer and scrapbooker and is keeper of a fairy garden.