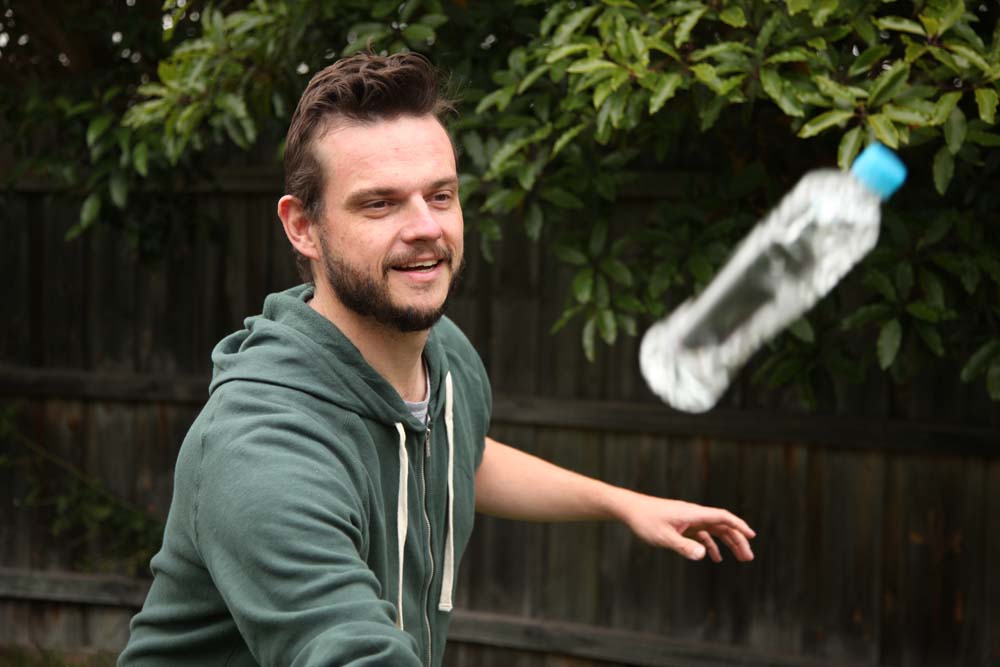 Having kids under school age, I was happily ignorant of the bottle-flipping mania that is sweeping the nation. So when our enigmatic editor, Melissa, sent me the video that has gone viral worldwide I just stared, mouth agape. I really must be a parent because I instantly asked the eternally uncool question, “How could this be incredibly popular?”.

In case you are as disconnected from modern pop culture as I am, the video shows an American high-schooler hamming it up on a small stage and then throwing a bottle, with a flip, which lands upright on a table. That’s it. Seriously. It’s not like he performed six somersaults and balanced on a chainsaw before flipping the bottle. How hard can it be?

So my Editor-Extraordinaire set me the Dad-task of accomplishing this great interwebs feat. Could I flip the bottle and land it right end up, and could I become a YouTube sensation?

Woah! Hold up there crazy person! You can’t just go running into this kind of uber-challenge without some hardcore research. I ignored the microfiche archives and got straight down to some serious Googling to see what kind of insights we can prime ourselves with:

Fully armed with my internet info, I raid Phenom-A-Mum’s stash of Mount Franklin and head straight for the old wooden table in the backyard. Glug, glug, glug. Uh oh, too much. Quick refill at the hose and ready to go.

Bottle one-third full. Check. Holding the bottle from the cap. Check. Priming the wrist-flick. Check. Looking like a man way too old to be doing this. Double check! I draw a deep, lingering breath, stare intently at the bottle and flick. She’s up, she’s rotating, she lands. Upright.

And, yep, no one around to see it happen. I run inside to tell Phenom-A-Mum, with all of the overjoyed enthusiasm of a puppy who just messed the floor and rolled in it. “Sure you did” is the response. I invite her outside to watch my triumphant do-over and manage to never land it again, no matter how many times I flick the wrist or hold it by the neck. I even try adjusting the water level but to no avail beyond my wife’s mocking laughter.

Meanwhile, my two munchkins are mesmerised by the deceptively simple challenge and literally scream for their own attempt. So much noise from people who are so small. Stupidly I take a split-second to blink and in that moment the bottle vanishes from the table and becomes centrepiece to a tug-of-war between a 3 year-old and a 1 year-old. The 1YO is winning; we call him Hulk Baby.

When the battle is won (by the 1YO) the kids spend many minutes entertained by bottle-flipping pleasure, attempting to replicate Phenom-A-Mum’s successful toss. That’s right. She nailed it.

I wonder if the kids would land upright if I threw them? Gotta make sure they’re only a third full at lunchtime…

[dropcap]TIP #1[/dropcap] WET FRACTIONS
You can use any old bottle but the key seems to be the amount of water inside of it. Too much and the bottle won’t flip, too little and it won’t stop. Aim to fill your bottle up to about a third with water (or vodka if the kids are giving you hell today… they’ll never know) for the best balance. You may need to sip to get it just right (especially if it’s vodka).

[dropcap]TIP #2[/dropcap] TAKE IT FROM THE TOP

According to the bottle-flipping sensation himself, Mike Senatore, you have to hold the bottle around the cap/neck area. This will allow the bottle to achieve sufficient spin, and to also look more professional when posing for your soon-to-be-viral selfie.

[dropcap]TIP #3[/dropcap] IT’S ALL IN THE WRISt (don’t be filthy)
Turns out that you can’t just chuck the bottle and hope for the best; your success and subsequent popularity rests solely on how well you flick your wrist, to achieve just the right degree of rotation. Clearly this is an art form perfectly designed for teenage boys…

David Hawkins is a Peninsula based stay-at-home-dad who realised that he needed to improve his Dadding. So he set himself the simple task of being an Awesome Dad. He now challenges all dads to be Awesome Dads, by doing something out-of-the-ordinary with their kids every month, via his blog Big Kid Little Kid.