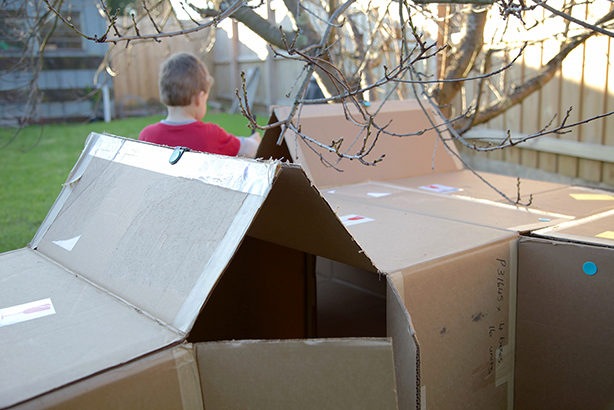 So. Winter is here. What are you going to do with the kids now that they’re trapped inside and going mental? It turns out that tying them to the washing machine and putting it on spin cycle for six hours is frowned upon (at least, that’s what the police told me). We’re going to need to get a little DAD-CRAFTY!

If you’ve got some big cardboard boxes and a whole lot of parent-needs-down-time enthusiasm! Then whip them into an awesome CARDBOARD BOX MAZE for the munchkins to lose their minds in. 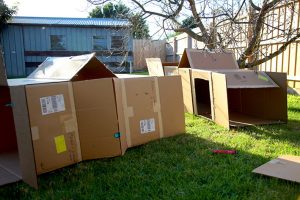 I’ve got no blueprint or instruction guide for you here because it’s a go nuts approach that will create the best play-maze. We’re all about connecting the boxes and seeing how many interesting hidey-holes or pop-up areas you can make.

Packing tape works the best, as it’s super strong and will battle valiantly against your childrens’ rough and tumble playing. But you can also use a pre-fab construction kit like I did. It comes with a plastic, safe-around-minors tool (hole punch & cardboard saw), hinges and connectors. The big upside to these plastic kits is that they can be reused, which allows me to pretend to be an environmental superhero. Plus, ripping apart all of that packing tape when you’re tidying up is just exhausting.

Here are a few builder’s tips to get you cardboard constructing:

As published in Peninsula Kids – Winter 2015