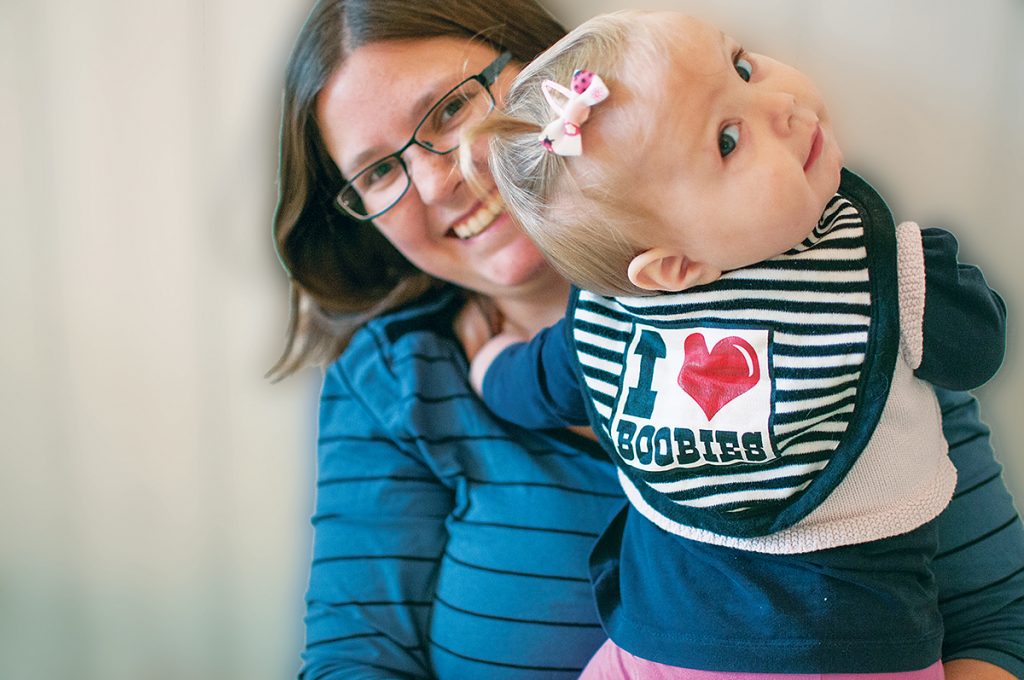 Breastfeeding is so much more than a source of milk. Human milk is a living fluid, custom-made on site for the babies. It contains what they need when they need it, from nutrition and emotional needs to specific immune support produced in response to viruses and other threats picked up and acted upon by the maternal immune system.

From the very first feed to the very last, from breakfast to bedtime and all through the night, breastmilk changes. It is flavoured by the mother’s meals, contains hormones to support sleep and evolves as the infant gets older. Every drop is beneficial, whatever the age of the child.

Australian Dietary Guidelines recommend babies are breastfed for at least 12 months – but what happens next?

Just 28% of Australian babies are still breastfeeding when they turn one and that figure falls to 9% at 18 months.

Only 5% of Australian toddlers reach the World Health Organization recommendation of breastfeeding for two years and beyond.

So, for most one-year-olds, who no longer have breastmilk in their diet, what should be replacing it?

Despite the heavy marketing by manufacturers and retailers, there are no benefits in continuing formula use into the second year.

Toddler formula, special milk drinks or other milk products targeting children aged 1 – 3 years have flooded the market in recent years, yet there is no evidence they are necessary or helpful in meeting dietary requirements. Indeed, they can reduce appetite and lead to further disinterest in food.

Children who are at risk of nutritional deficit can be given supplements in better forms than these drinks.

Many parents of one-year-olds moving on from breast or bottle feeds wonder how much cow’s milk – or replacement – their child needs to drink each day.

However, the Australian Dietary Guidelines for toddlers recommend only 1 – 1.5 serves of dairy each day (a standard serving size is 250ml of milk, 40gm of cheese, 200gm of yoghurt). Most toddlers easily meet this requirement from food and don’t need to drink large quantities of milk.

Children who can’t or won’t eat or drink dairy foods can meet their calcium requirements from foods such as almond butter, canned fish with soft bones like sardines and salmon, or firm tofu etc.

Continuing the use of bottles once upper incisors and other teeth erupt is associated with higher risk of dental decay.

Paediatric dentists like to see children give up bottles as soon as possible – before or around the first birthday is a good plan.

Australian Dietary Guidelines also recommend infant formula be used only until 12 months, so working toward weaning from both also reduces the risk of dependence on bedtime bottles of milk to sleep. Ideally, begin the transition around nine months.

While many families turn to milk-like drinks made from nuts or cereals, such as almond milk, oat milk etc, these aren’t essential in our diet and children don’t need to be routinely drinking them.

If you choose to include these drinks in your family diet, it is important to check the label for added calcium (at least 100gm per 100mls) and how much sugar that has been added to make it more palatable.

If this all seems a bit overwhelming and you’re still breastfeeding, it’s good to know the easiest option of all is to keep a good thing going!

The value of breastfeeding in the second year and beyond is more than nutritional. Unlike alternatives, breastmilk continues to support the individual immune system; provide comfort and connection to an increasingly independent child; and offers a range of factors not available in non-human milks.

A breastfed toddler gets a surprising amount of their daily nutrition without fuss, so you can focus on exploring the experience of eating family foods without stressing about what they do – or don’t – eat!

The World Health Organization recommends breastfeeding into the third year and beyond – so if it’s working for your family, then it’s good to know you can continue.

Formula is not the same as breastfeeding in the second year

It can be confronting for parents to be told the differences between breastfeeding and bottle feeding. Because of the emotional impact of not overcoming challenges to establish or maintain breastfeeding, parents are reassured that fed Is best and formula feeding is pretty much the same anyway.

Formula feeds babies who do not have access to human milk. Cow or goat milk or soy milk can be modified to make it safer for babies, but we do need to acknowledge it cannot make it the same.

The differences really become apparent as babies reach the end of the first year. And sometimes the facts around this can trigger the emotions of the months before all over again. However, information is not judgement and parents can only make informed choices when they have all the facts.

Breastmilk becomes the secondary food source in the second year.

However, for breastfed toddlers, the immune support and developmental support in factors unique to their mother’s milk are not replicated in formula. While breastmilk continues to adapt to the changing needs of the toddler, formula does not. And despite the marketing, toddler formula is not much different to infant formula … except for the added sugar in some brands. Effectively, parents are tricked into buying sweetened, flavoured powdered cow’s milk drinks.

The term “nursing caries” was coined by dentists in the 20th century to describe the type of tooth decay they were seeing in toddlers. Unfortunately, their terminology was flawed as nursing has long been used to describe breastfeeding and the percentage of toddlers still at the breast was negligible in most western societies where the condition was being observed.

Older babies and toddlers who have developed their upper front teeth are at particular risk of decay, caused by milk pooling behind the teeth while sleeping. This is a functional problem created by children falling asleep with a bottle and continuing to hold it in the mouth while sleeping. The design of teats allows a steady drip to be released because of gravity, even when the child is not actively sucking.

The condition is also – and more accurately – known as “bottle caries”.

Breasts are not bottles and nipples are not teats. When a child falls into deep sleep, the breast relaxes and the milk ceases to flow. There is no dripping. There is no pooling.

Breastfeeding toddlers, like other children, can develop tooth decay. They get it because of genetics, diet, and dental hygiene factors. They do not get it because they are breastfed. Correlation is not causation.

Research continues and it is important for dentists and parents to keep up to date with the results; but also, to understand that breastfeeding itself has a positive impact on oral development and is the biological normal for human children in the early years of life. Breastfeeding and bedsharing – breastsleeping – is culturally and physiologically typical beyond infancy. Rinsing the mouth with water is impractical and unnecessary.

It is normal and natural for breastfeeding to continue until the child is developmentally ready to wean. Mothers who are breastfeeding their toddler should be supported in doing so without pressure from others to stop. The benefits of breastmilk do not vanish overnight when babies celebrate their first or second birthdays … or even beyond!

Yvette O’Dowd is not your typical grandmother! This mother of three and ‘Granny’ of three has been a breastfeeding counsellor since 1992. In 2014, Yvette established the Southern Natural Parenting Network, incorporating South Eastern Babywearing Group. With 11,000 members world-wide, the group supports parents interested in breastfeeding, babywearing, co-sleeping, baby-led weaning and modern cloth nappies and other aspects of gentle, natural parenting.