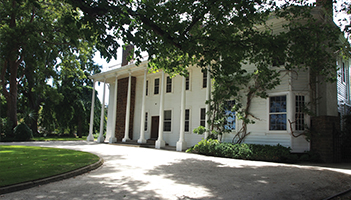 Cruden Farm, home to the late Dame Elisabeth Murdoch, holds a special place in many people’s hearts. It’s a place of tranquillity, inspiration, beauty, friendship, generosity, loyalty and above all else is the vision of one extraordinary woman that always put others before herself.

Back in 2009 I had the privilege of meeting Dame Elisabeth and her gardener Michael Morrison by chance at a community event held at Cruden Farm. Michael was driving the buggy around the grounds with Dame Elisabeth by his side when she spotted my then newborn son and stopped to give him a cuddle.  I remember that moment well; she gazed at him with such warmth and loving eyes, as if she was momentarily transported back in time to holding her own son. It was a special moment captured in a photograph that I later sent to her with a note. Despite her many commitments and being 100 years young at the time she replied within a week with a lovely letter thanking me for the photograph and hoping we had an enjoyable day at the farm. I mention this because I feel it represents the type of person she was better than any words I can put on a page. A genuinely warm person that willingly gave her time to anyone she met.

Something she was truly passionate about was Cruden farm, a wedding gift from the love of her life Sir Keith Murdoch, a journalist and newspaper executive.  At the time she was only 19 years old but had visions beyond her years for the 133 acre farm with barely a tree on it. Keith decided the best way he could support Elisabeth with her vision was to enlist the services of Edna Walling (an acclaimed gardener of the time) to contribute to the design of the garden, however the garden was almost entirely destroyed by bushfire in 1944 although some elements remained and can still be seen today such as the stone walls, circular lawn and the world-renowned lemon–scented gums that stretch from the front entrance along the sweeping drive to the house.

In 1952 Sir Keith passed away in his sleep at Cruden Farm leaving Dame Elisabeth a widow at the age of 43 and left to raise 4 children. Not long after Sir Keith’s passing she moved permanently to Cruden Farm where she could indulge in her two biggest passions: gardening and helping those in need.  Whilst Dame Elisabeth did much of the gardening herself she employed Michael Morrison in 1971 to help out on Sunday mornings, Michael was gardener no. 2, Dame Elizabeth was gardener no.1 and over the years they made a formidable team that lasted generations. In fact after 45 years you will still find Michael tending to the garden and ensuring Dame Elisabeth’s garden is just how she liked it. Not fussy, not showy and forever evolving with the times to be enjoyed today, tomorrow and well into the future.

I recently took a tour of the gardens with Cruden Farms managing director John Christie and although I’ve visited many times in the past with my children for family fun days, open gardens and car shows I had never really stopped to take it all in. One of the things that always stood out to me however, for no particular reason other than its beauty was the old water tank. A small wooden platform holds the tank high off the ground under a canopy of old trees with vines entangling themselves on the steel frame supporting it. This small tank as it turns out was the only water supply for both the home and garden until the mains water was connected in the 70’s. I was told Dame Elizabeth would rise early to hand pump the water for the garden, a chore I certainly imagine her doing with a smile.

Nearby to the water tank are the magnificent stables and outbuildings which were built during the Depression after the Murdochs employed men that were desperate for work. Percy Meldrum designed the stables and sourced the stone from the old Moorooduc Quarry for the construction. If you look at the stone on the stable walls you can actually see the chisel marks left in the stone. In the near future, horses may once again return to Cruden Farm, which would be lovely to see.

As for the gardens they were in full bloom with roses, sunflowers, and perennials bordered mostly by blue stone and lush green grass areas perfect for a picnic. In the stone-walled garden there is a lovely simple sculpture of Dame Elisabeth that is slightly obscured by plantings. When I asked why it was tucked away and the answer was “it’s how she would have wanted it”. She would find pleasure in having people find it.

Everything at Cruden farm has an understated elegance just like Dame Elisabeth.

A visit to Cruden Farm is a must and you will find it open to the public twice a month. Dates are released on a month to month basis and can be found at www.crudenfarm.com.au. Admission is $20 for adults but for an extra $15 I recommend taking a tour of the garden. Tours last between 1.5-2 hours and covers much of the farms history and insight into the lay out and thoughts behind the garden. Children are welcome and encouraged on the tours.

As well as the tours Cruden Farm remains largely devoted to community and charity functions and as a part of the general public I can say that we are very fortunate to be able to stroll through this marvellous garden and admire the 80 years of hard work and dedication that Dame Elisabeth created for future generations to enjoy and at the same time continue to support charities that were close to her heart.