Dad’s On the Loose, at Big Goose 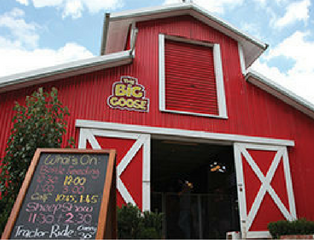 I have one major fear: geese. Those beady black eyes, Quasimodo-style hobble and crotch high beaks are a recipe of pure terror for me.  So, naturally, Peninsula Kids Magazine asked me to check out a kids adventure farm named after THE BIG GOOSE! I called on fellow dad and tops mate, Jorge, to bring along his family so that I had enough decoys should we be attacked by a honking horde!

Jorge is the father of my son Little E’s best friend. We’ll call her Chica S! We were ready to unleash our three year-olds on an unsuspecting kids’ adventure park.

The Big Goose is literally brand new, having only opened in October last year (2015), and I sniffed deeply to breathe in that new attraction smell. Colours are vibrant, the animals perky and the staff as friendly as you can get. The wonderful service started at the ticket booth as we were greeted with a bright smile and a warm welcome. It almost felt like we were visiting family (except for the smiling and warm welcome).

Barely five steps from the entrance the kids began pointing at some cute goats who were poking their heads through a fence in expectation of being fed, so I bought some animal feed and handed it around. The kids screeched like they were auditioning for the newest Scream movie and backed away. Typical. Moments later the adults were having their hands tickled by the tongues of the goats and sheep as we attempted to show the munchkins that it was safe.

Camels, ostriches, pigs, donkeys, chickens, peacocks & hens. We found lots of animals that the preschoolers were too terrified to feed (feeding the ostriches, in particular, is an experience best left to the Big Kids… though I was having nightmares for a week!). Jorge’s favourite find was a Highland Coo (that’s ‘cow’ for those who don’t speak Scottish) with its woolly red locks and soon-to-be-impressive horns.

The showpiece of the farm is a huge, red barn that houses the petting zone where kids can cuddle lambs and kids (goats, not other children. Although that probably happens too) and pat guinea pigs & baby chicks. Each stall contains a different animal and there are keepers around to help you or save the creatures from overly affectionate children.

While that’s great for the kids, Jorge and I found those cutesy animals a bit boring. Luckily though, we happened to be visiting on a weekend when the reptile show takes place (also during school holidays). Outside of show times you just might be as lucky as we were to catch Lachlan, the reptile expert, who is willing to drape you with a python or pile lizards onto your goggle-eyed preschooler!

The Big Goose is a kids fun park, not just a petting zoo. The range of animals is definitely a main focus but how long can you really get your kids to look at them for? If your lot are like Chica S and Little E then you’re lucky to make it an hour before the whingeing kicks in. And that’s when the park’s secret weapons need to be unleashed – the Adventure Playground and the toddler-magnet also known as the Jumping Pillow.

I LOVE the playground! It’s not one of those pre-fab plastic concoctions found in public parks across the city. It is a custom-built, two-level, net-crawling, sand-surrounded land of awesome! It is so cool that I even found excuses to ‘help’ Little E just so I could go further in and check it all out. There are ladders, slides, mini flying-foxes, nets galore to clamber across and even a huge van that acts as the access way between levels. Although it is recommended for ages 5 & up, three year-olds have just as much fun, as long as they don’t mind the bigger kids racing around. You will even find a separate sandy spot for the littl’uns to crawl about in.

But nothing, and I do mean nothing, can match a child’s addiction to the Jumping Pillow. That is literally what it is; a giant inflated pillow that you can jump on. And they do. Up and down. Back and forth. Hour after hour. Us old folk grabbed coffees from the Cafe (which just happens to be a shining silver Airstream trailer straight out of a Hollywood backlot. Awesome!) and sat down at the surrounding tables to see just how long the mini-peeps could jump for. It was a long time.

Kids need more entertainment? How about pony rides or mini-golf ?(these are an additional cost). Or they could take a tractor ride around the farm and then navigate the Tyre Maze. It’s actually pretty crazy how much is on offer to keep the munchkins busy.

The reason the park is so different to others you may find around is Justin, the owner and dreamer. He is beyond passionate about creating the best kids fun park in the country (not kidding!) and has so many more ideas that he has dreamt up, ready to bring to life. In fact, this year Justin is going to add an extension to the Adventure Playground (you know, just a three-level slide inside a silo. I wanna go!) and an Australiana wildlife reserve with kangaroos, koalas and reptiles.

Little E and Chica S had to be dragged out of The Big Goose. Actually dragged. It turns out that preschoolers love everything inside! The official review from Jorge, “It’s very cool!”

And here’s an inside-tip for you: consider purchasing an annual pass so that you can pop in whenever the kids are breaking your soul. Instant parent-saver. If you live on the Mornington Peninsula it’s extreme value as you can swing by for 30 mins on the Jumping Pillow, to wear your minions out, and then head off for an afternoon of tiny snores.

The Big Goose is located at 233 Mornington-Tyabb Road Moorooduc