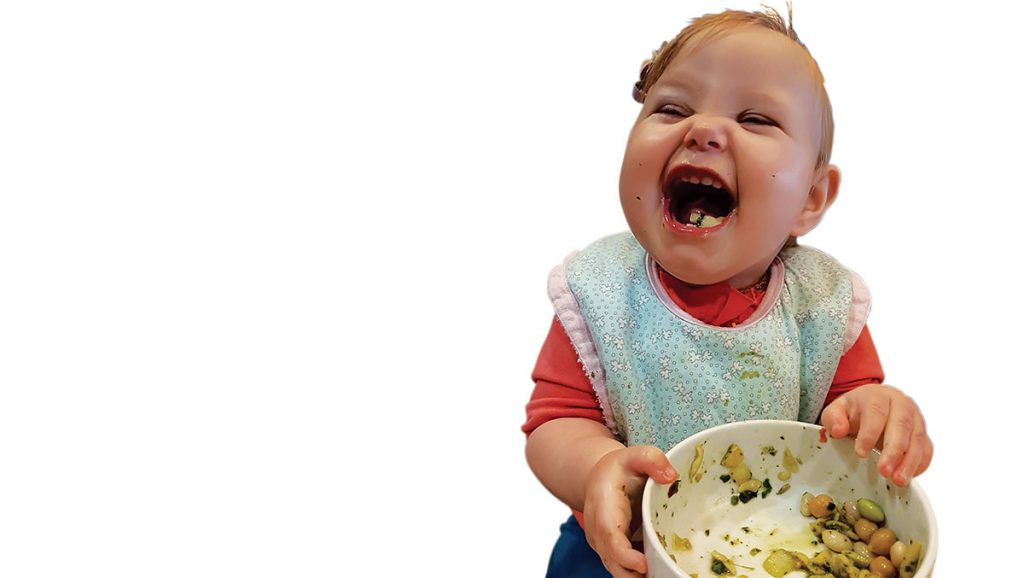 If your image of starting babies on solids involves sloppy rice cereal, strained pears and pureed vegetables, then baby-led weaning might come as a bit of a shock!

In the past, babies were introduced to solids much earlier than they are today – even as early as a few weeks of age. For babies aged 2-4 months, the only way for them to safely ingest solid foods without choking was to puree them finely – in fact, liquefy them. Boiling or steaming fruits, then vegetables – in strict order – then pureeing them by forcing them through a sieve and mixing with a little boiled water, before spooning the sloppy mix into the gaping mouth of a reclined infant was tedious and time-consuming after the novelty wore off. Not surprisingly, mothers were drawn to the little jars, cans and packets of prepared foods which began to fill the supermarkets after World War ll and being able to afford commercial baby foods quickly became a status symbol in the mid- 20th century.

By the 80s and 90s, the recommended age became 4-6 months, but babies were still not able to chew and swallow foods without pureeing and mashing. Mothers who were into natural health returned to preparing fresh produce, often pureeing with a Mouli sieve and, increasingly, using blenders and food processors to render food suitable to swallow. A strict timeline evolved to begin with rice cereal, mixed with breastmilk, formula or boiled water, moving on to pureed fruits, vegetables, meats and grains, then later those foods mashed and – finally – finger foods were introduced around 7-8 months of age.

But a revolution was quietly brewing. The importance of breastmilk gained recognition and in 2002 the World Health Organisation produced guidelines that babies be exclusively breastfed – with no other milks, drinks or foods – for the first half-year. Health authorities around the world followed suit and solids were now recommended from around six months.

In the UK, Health Visitor (Maternal and Child Health Nurse equivalent) Gil Rapley was questioning the need to bother with all that pureeing, if babies were not starting to eat until after the need for it had passed. At six months, babies are able to sit upright, lose their natural tongue thrust reflex and develop the hand-eye coordination which allows them to bring objects to their own mouth. They are capable of biting and chewing – regardless of the presence or lack of teeth – their gagging reflex is effective in preventing choking and they are developmentally ready to eat solid food in its solid form.

Rapley’s book Baby-Led Weaning, co-authored by Tracey Murkett was published in 2008 and is still the definitive text on the subject. It explains why it makes absolute sense to introduce babies to solid foods this way. It’s full of tips for how to use BLW with your baby – and what to expect when you do.

So – what exactly IS baby-led weaning? Well – firstly, you need to understand the use of the word “weaning” in its British meaning: it refers to starting solid foods, not ending milk feeds.

A four-month old baby will begin showing interest in people eating, not because he is ready to join in, but so he can learn the process. He will study how you move your hand from plate to mouth and try to copy you.

He will grab at food, cutlery, plates and makes chewing movements and even drools! Sit him on your lap and let him learn, but don’t mistake these signs as him needing food – he isn’t ready yet.

Being physically ready to eat food is very important. All three signs of readiness need to be in place before you begin.

Your baby is ready to eat when:

He can sit upright in his high-chair unsupported

He can bring his hand to his mouth when playing

He can swallow food because the tongue reflex is now gone

It isn’t about age since birth but about physical development. If your baby hits these milestones earlier – or later – than the average six months, adjust as needed. There is no rush. Around six months allows for a few weeks either side.

Offer foods your baby can grab hold of easily – “food with handles” like strips of cooked steak or roast meat; broccoli, carrot and other vegies cut into sticks long enough to hold in his hand, thick pieces of fruit with the skin left on. Whatever you prepare for dinner can be adapted for baby – there is no need to cook separate meals. His hands can soon pick up pieces of pasta, clumps of rice, bits of chicken or fish, baked beans and other legumes … the only foods off the menu are honey and whole nuts. Nut butter spread on toast or dolloped on his tray will help his protein intake and provide essential fats.

Between 6-12 months, milk – either breastmilk or infant formula – is still the primary food source and solids should not yet take over. By letting him control what he eats and how much, you can avoid over-feeding him.

“Food before one is just for fun!” Let him play with his food and experience how it feels and tastes. He will pick it up, drop it, dip it, squish it, lick it and learn how far to put it in his mouth. He is not likely to choke because his natural gag reflex will kick in if food goes too far back – gagging is not choking – and he will probably pop the food back into his hand, look at it and put it back in again!  First aid training will teach you what to do if he chokes at any age. Sitting with your focus on him while he eats (not your phone!) is important.

Sharing the experience of food and eating with your baby is a wonderful way to introduce eating.  Baby-led weaning frees you from boring purees and mash and allows you to share meals with your little one.

Yvette O’Dowd is not your typical grandmother! This mother of three and Granny of two has been a breastfeeding counsellor for more than 25 years. In 2014, Yvette established the Southern Natural Parenting Network, incorporating South Eastern Babywearing Group. With 8000 members world-wide, the group supports parents interested in breastfeeding, babywearing, co-sleeping, baby-led weaning and modern cloth nappies – and other aspects of gentle, natural parenting. Yvette has lived in Frankston for 45 years.