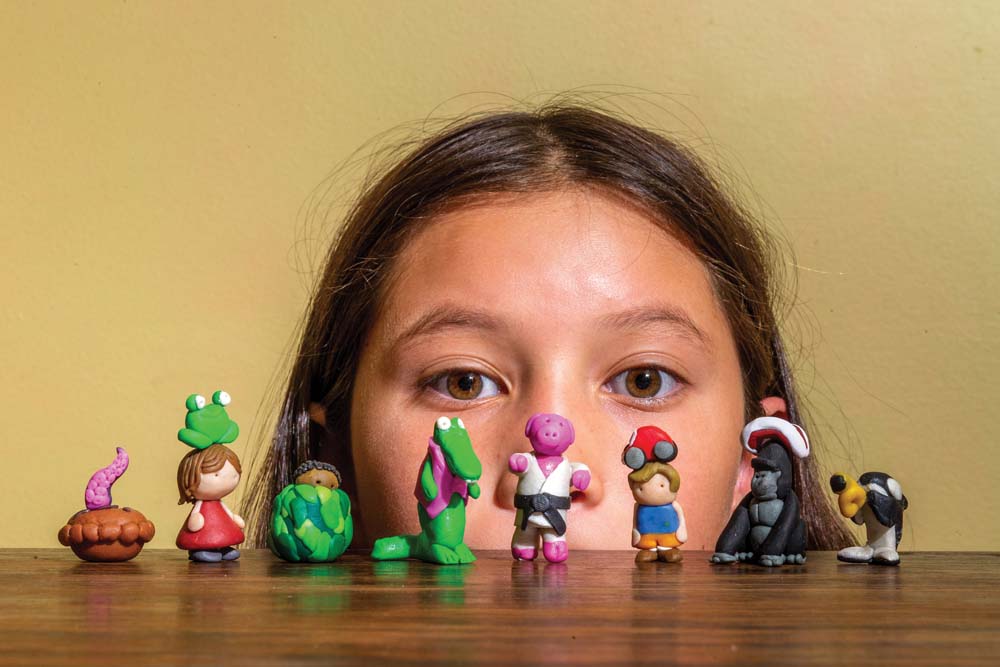 While many ten year olds are playing on their iPad or watching TV, there’s a cool kid in Crib Point that is already setting up her own business and kicking some serious goals.

Rylee Yong started her own Mini Makers business in September last year and has already sold heaps of her handmade polymer characters. With the help of her dad, Andy, Rylee makes tiny characters based on word-plays or dad jokes.

“I have done a few market stalls and am now getting some orders for birthday cake toppers and other gifts,” said Rylee from her home where she creates these amazing little characters.

With an incredible drive and determination, Rylee has come up with some ripper names for her Mini Maker’s characters, which all began when she and her dad were in New Zealand and started making things with the clay.

“Dad found this polymer clay and we started making little people. The first one we made was Lily, which I still have,” she said.

With an animator for a dad, creativity doesn’t fall far from the tree and Rylee is determined to continue to bring joy and fun to everyone who checks out her quirky characters.

“Ever since we started making clay characters, we have made so many,” said Rylee. “When we came back to Australia, it took a while for dad to find the clay again but he eventually did and now we have a heap of different mini maker characters to sell.”

Rylee says she loves making things with her hands which she discovered doing a pottery class.

“Now I make things all the time with the polymer clay and find inspiration all around here and especially when I think of word play or dad says a funny joke,” she said.

These days, Rylee has displayed her Mini Makers at three markets, (Somers, Twilight, and Emu Plains), and loves talking to people about the characters and their funny names.

“The first one my dad made was a girl called Lily which we still have, but now we have lots of different characters like Ann Tique, Ben Dover, Eileen Dover and her friend Sitting Duck. There’s Pork Chop, a pig wearing a karate outfit, and Lamb Chop, his friend the sheep. We have Theresa Green, our nature lover, and Bull Dozer, who is a sleeping bull,” she said of a few of the tiny characters.

“We have some lovely inspirational gifts, hilarious characters and DIY kits too so you can make your own,” said Rylee.

You can see Rylee’s Mini Makers on Instagram at @minimakers_au