Jimmy Rees – A Life Worth Giggling About 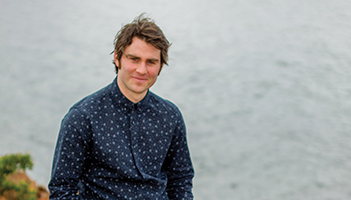 TWENTY-EIGHT-YEAR-OLD JIMMY REES HAS BEEN LULLING OUR CHILDREN TO SLEEP DURING THE GOODNIGHT HOUR SINCE 2009. NOW IT’S TIME FOR HIM TO APPLY ALL OF HIS TECHNIQUES AT HOME WITH NEW SON, LENNY. MPK SAT DOWN TO CHAT WITH JIMMY ABOUT BEING A NEW DAD AND HOW A KID FROM MT ELIZA ENDED UP BECOMING A SUPERSTAR TO PRE-SCHOOLERS AND PARENTS ALIKE.

“I was doing amateur theatre in Frankston and knew I just wanted to get into the industry at some point. I enjoy making people laugh and entertaining people. I don’t see myself as an actor per se. I’m good at playing a silly character like Jimmy Giggle.”

Jimmy hadn’t looked into getting an agent to organise auditions when then girlfriend, Tori, saw the advertisement for a national call in the paper. There were 5,500 entrants and this was Jimmy’s first audition.

He tells us, “I got the phone call with the offer for the role in new pre-school show Giggle and Hoot while I was working at the local pub. I ran upstairs into the office to take the call. The producer asked if I could sing and asked for a sample of my vocals on the spot.” As the front runner for the part, staff on the set started referring to the actor as Jimmy Giggle…and it stuck. He was casted in October and on air in December. “It was sort of like in a big whirlwind. There was quite a learning curve.” So off to Sydney Jimmy and Tori went. But the move didn’t last long. They returned to Melbourne after a few months and Jimmy commuted.

Little did he know how popular the lovable characters Giggle and Hoot would become. “My first realisation of how well it was going was when a little signing and meet and greet was organised at Eastland. I went out there in my pyjamas and there were literally hundreds of families lined up. It was a wow moment. OK – this is popular.”

After getting used to the routine of working Wednesday through Friday, Jimmy and Tori tried for a second time to move to Sydney. It didn’t last long. Tori fell pregnant and the now married couple thought they’d better come back down.

The Mornington Peninsula is definitely home for Jimmy Rees. H grew up in Mt Eliza and attended St Thomas Moore Primary School and then The Peninsula School. Tori taught at Benton’s Junior College for a year before moving to Sydney. She loved teaching, but for now, is relishing being a stay at home mum.

It was a crazy time in the lead up to Baby Rees’ arrival on April 7th. The Giggle and Hoot tour was beginning in April and little Lenny was due to arrive in late April.

They had to wait 12 weeks to announce the birth of baby Lenny to due to agreements with a magazine and Jimmy’s fans were growing quite concerned. “Even if I mentioned we had a tour coming up people would respond with, ‘when’s the baby coming, is everything ok?’”

Once they were able to officially announce the arrival of Lenny they received great support from plenty of social media groups such as Mornington Peninsula Kids that were happy to share the photos and good news.

Jimmy remembers the birth going well. Tori and Lenny were safe and happy and then all of a sudden thought, “I’m a dad! I’ve got to keep him alive!”

While mum does take care of most of what Lenny needs Jimmy is the entertainer. He’s happy to pitch in with feedings and whatever else he can do whenever he can.

“It’s so amazing. He’s only four months old and the growth is exponential. Smiling, then winking, and frustrated because he can’t do something.”

On the topic of sleeping, Jimmy tells us that Lenny has been a dreamboat from pretty much as soon as they got home from the hospital. (Jealous much?) He’s now practically sleeping all the way through; waking up once around midnight for a feed and then back to sleep until around seven. His day sleeps aren’t that great, but he’s coming along.

When asked about the all important support system Jimmy tells us, “All of our families live around here within a few postcodes. That’s another reason we came back from Sydney, at least for our first. We still haven’t utilised any of our babysitting offers yet, though.”

The family is all set up in their home base down here. Travelling up and back three days a week to work usually, but sometimes getting an extra break here and there while other times, especially when touring, there’s a bit more hands on time. “This time, which is great, we’re coming to Frankston, Geelong and Tassie, so a bit more regional.”

“It’s such a crazy and amazing time.”