The Making of GRANDparents 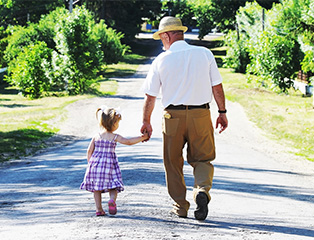 We seem to have hit the terrible twos earlier than expected in this house.  In fact…I think the term is somewhat of a misnomer.  They should call it, ‘the age of trying to “break” your parents’… and I am suspicious that it might last from toddler-hood to that time that you’re supposed to be ‘grown-up’.  After a morning of more high-pitched noise pollution than any human being should have to endure, I packed our banshee into the car and raced off to refuge with his Nanna & Poppy.

It is there that I found a fleeting minute of calm and clarity, along with the inspiration for this article.  I had a cheeky nap there while Bubba Duck did and when I woke, I had a peek out of their open window.  Looking out over their familiar backyard, a feeling of reassurance and warmth washed over me.  Our perfectly imperfect family is beautiful and real, just the right balance of routine and chaos for our lucky young man to thrive in. His Nanna and Poppy allow him too much ice-cream and chocolate (that much is true), but his memories will be of racing down their staircase while clutching the beautiful old wooden handrail, deeply coloured with a rich history.  He will point at photographs on their wall of his Mum and Dad, young and full of expectation and ask, “who are they?”  Dinners will be had on laps on their couch whilst getting swept away in movie story lines….Poppy forever at the ready to cover him and his big cousins with one of Nanna’s soft blankets when they give in to sleep.  Our son may be young, but he is clever.  The model cars that Poppy taught him are only for gazing upon are already making it into grubby hands, one-by-one at Bubba Duck’s request.  He is also clever enough to realise that if he lets Nanna comb his hair to the side (the way she loves to do), he might just get a little treat in return.

For his Grandma, Bubba Duck is her first grandchild.  At Grandma and Grandpa’s house, he can indulge in his love of exploring and running carelessly in the sun (or rain!)  Their home is gradually being ‘redecorated’ with rubber ducks, a highchair, noisy toys and old relics that will intrigue our son as he grows and enjoys more independence.  Grandpa has a tractor and a huge shed filled with curios that a little boy with busy hands will investigate with the intense concentration of a scientist trying to prove a hypothesis.  Grandma has a warm and soft lap …. forever waiting for those rare moments when a little bottom sits still long enough to enjoy a cuddle.  She sings animated songs and loves our child as much as she does her own two grown children …. possibly more!

Observing our son’s grandparents weaving into his colourful life has given me as much joy as the day he entered our world.  It has also served as a poignant reminder to be kinder to my own parents.  No-one can prepare you for what it will truly be like when you become a parent and there is no manual guiding you how to do the job perfectly.  Sacrifice becomes a regular action as you care for the little life you are responsible for.  We are all fallible and uncertain, and just trying to do the best job we can.  And it is immensely comforting to know that on the days we struggle to do that well, the parents that have ‘been there, and done that’ are right behind us ready to do it all again!

Mumma Duck Says is a place where life and food gets in the way! A place for Karli to share her cooking, motherhood and creative journey with friends. You can follow her via Mumma Duck Says on Facebook or visit her blog at www.mummaduckblog.wordpress.com