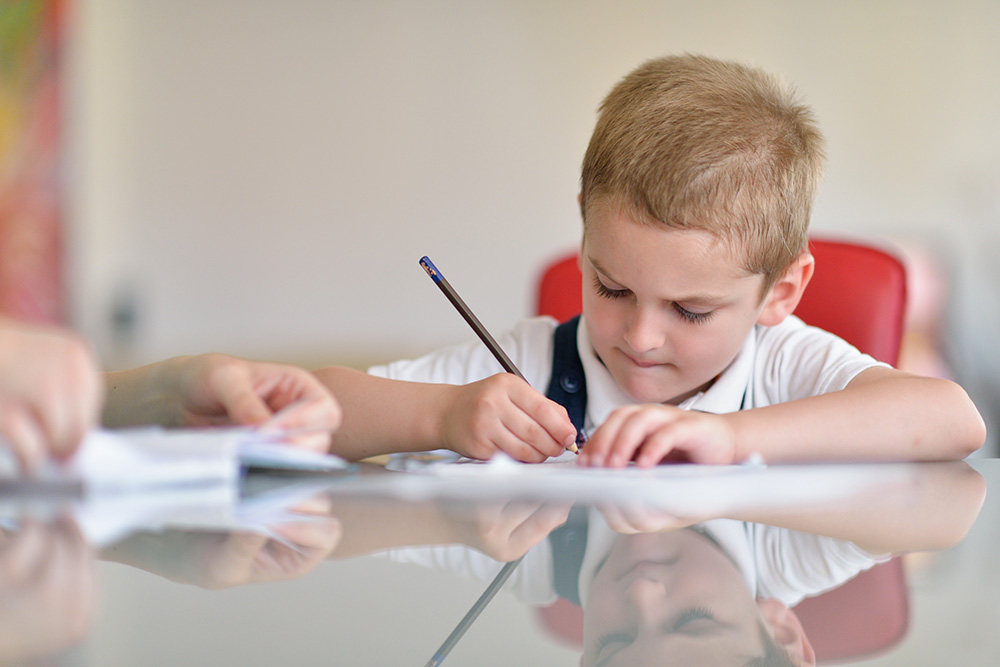 Afew years ago I was lying on the floor with our son watching him draw. He was about 6 at the time. He was happy and relaxed for a while, but then he made a mistake. He screwed up the drawing, threw the crunched up ball of paper across the floor and said “I’m hopeless at this.”

I’d spent the 6 years leading up to that moment peppering his life with conscious comments about making mistakes and how much we learn from them. Talking about my own mistakes and even deliberately making mistakes when we drew together to show him how normal it is, and how to handle it. Despite the fact that he always thought my drawings were A-MAY-ZING as I showed how to put arms on the body of his stick figure people rather than coming out of their heads – I figured I was planting plenty of seeds with him around mistakes, effort, practice and imperfection. Clearly, I had a way to go.

This particular occasion really upset me. In that moment I was taken back to my school days of many a screwed up piece of paper in the corner of my room as I repeatedly started over project covers, headings and posters in a painful and futile pursuit of perfection.

I was upset because I knew what perfectionism had meant for me. The anxiety and the wasted time. Soooo much wasted time. And paper.

In that moment, I was catastrophising that somehow him screwing up the paper and saying how hopeless he was, was a glimpse into a future for him with perfectionistic tendencies I’d consciously worked to help him avoid.

I really didn’t want that for him, especially knowing that certain types of perfectionism go hand in hand with pathological worry and generalised anxiety disorder.

Oh the benefit of hindsight! It’s clear to me now that I overreacted (albeit in my own head – gotta love that mental chatter!), that all was not lost, that it was just another day in the life of a parent, and another opportunity to impart yet more wisdom!

It’s probably worth mentioning here that since adopting the ‘it doesn’t need to be perfect, it just needs to be shared’ motto, I’m a proudly reformed perfectionist. Don’t get me wrong, I’m all about 100% best effort with everything I do. Well, almost everything; sometimes dinner is toasted sandwiches and baked beans and there’s a mountain of ironing in the laundry; but no longer do I agonise over the little things, the details that don’t actually matter. The meaningless time wasters. Very, very good is good enough.

In that moment, just after the paper ball went sliding past me, I handled it very differently than I would have years before. I could have told him that his drawing was wonderful. I could have pointed out all of his clever and artistic drawings in our ‘art gallery’ on the family room wall; all in an attempt to convince him he was wrong about being hopeless at drawing. That his thinking was wrong and I could prove it because I had mountains of evidence to the contrary.

I simply asked him a question.

I followed by asking “Well, what would be helpful then?”

We had a chat and agreed that he could try again, that practicing was helpful, that he would make lots more mistakes and that’s a good thing. That mistakes are the way we learn and that over time he would become better at drawing.

He happily returned to his new picture, reassured, once again, that no-one is born great at anything!

“Is thinking like that helpful?” is a question I use a lot with our kids. It takes away the need to prove right or wrong, and helps them to move on quickly. I use it a lot personally too.

It’s hard to see our kids struggling, especially when they get down on themselves. And it’s natural to want to stop them from suffering and buoy them up with lashings of praise and validation. But is that actually helping them?

If we are constantly praising them three things can happen. One, it loses all it’s meaning; two, they come to expect to be rewarded for every little thing they do and, lastly, their expectations of themselves can rise above their capabilities and they can struggle with the effort required between being a newbie, improving and becoming great at the things they attempt.

Instead, if we can be mindful about praising our kids’ efforts, rewarding progress, encourage learning from mistakes and discourage perfection, we’re setting them up to work for what they want. We’re also creating space and time for them to experience and enjoy a true sense of accomplishment, one that comes from a personal sense of pride.

Over time, they’ll internalise the notion that reward comes from effort and that improvement takes time. Along with this comes the understanding that the road from beginner to great has a few bumps, is anything but straight, and that their accomplishments are worthy of perseverance.

Jodi is a happiness and wellbeing speaker and writer, and is mum to two primary school aged kids who totally light her up. For more great ideas on flourishing mental health for the whole family, subscribe to her newsletter at drjodirichardson.com.au and say hello on facebook.com/DrJodiRichardson

As published in Peninsula Kids – Spring 2017