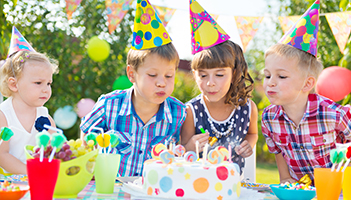 It was supposed to be a low-key “easy” four-year-old birthday party. The concept was brilliant: guests would come to the local miniature railway, BYO picnic, pitch a rug, tote a present and in return they would get a couple of tickets to ride the rails and some birthday cake. With a newborn baby to care for, my friend didn’t have the time or energy to arrange anything too extravagant.

Showers were forecast for the morning, clearing by the afternoon. Perfect. Party is planned for 1.00pm.

Mum sent out a group-SMS redirecting party-goers to their nearby house.

A few minutes in, the kids didn’t seem to care about the change of location or the absence of miniature steam engines. The birthday boy spent most of the afternoon whooping about the house with his friends, dressed in his brand new Woody cowboy outfit (which he also slept in that night and wore the next day with a fresh pair of underwear, of course).

This near-catastrophe-turned-great-success got me thinking: why do we worry so much about planning for kids birthday parties these days?

What is the purpose of a birthday party, really, and who is it for?

British researchers recently found that parents are now spending an average of 213 pounds (around AU$360) on their kids’ birthday parties, with 11 per cent spending at least 800 pounds (over AU$1300) in an attempt to outdo their child’s peers. Party bags which used to contain a freddo frog, a few smarties and a jelly snake now boast gift vouchers, make-up and even iPods.

Australians are jumping on the party extravaganza bandwagon too, with event management businesses popping up dedicated to planning childrens parties. Parents have been known to spend up to $4000 on a five-year-old’s birthday bash.

Children’s birthday parties were first celebrated by the Germans in the late 1700s. There were candles and cake, just like today. The birthday boy or girl blew out a candle for each year they had been alive, just like today. However, they also lit and blew out one extra candle to make a wish that they would live to see another birthday.

And therein lies the true meaning of a birthday. Celebrating your child’s birthday is an indication that they have made it through another year. Alive and (hopefully) well.

As the kids played happily around me, the image that played itself over and over in my mind was of a mother, desperately trying to rouse her 15-month-old from sleep. The 000 phone call. The ambulance sirens. The paramedics unable to resuscitate him.

The child was the nephew of a friend of a friend. One night last week he went to sleep and never woke up. There was no warning, no illness. There will be no second birthday party.

I never knew him. I don’t know his family. But as I watched my own 15-month-old son pluck out and wander off with the kitchen ducted heating vent (for the fourth time that hour) I had to resist the strong urge to hold his cheek to mine and carry him around in my arms all day. Because I knew that there, but for the fickle hand of fate, go I.

If you have the funds and the desire, by all means, please spend as much as you like on your child’s birthday celebrations. Hire an animal farm, a jumping castle, a party planner and entertainer. Invite the whole class and send them home with PlayStations.

But take a moment and remember why you’re doing it. Light that extra candle, be thankful and look forward to another year of warm snuggles in the early morning; laughter, tears, tantrums and mess during the day, and softly snoring heads on pillows, tucked up safely in bed at night.