Rock – ing out with the kids! 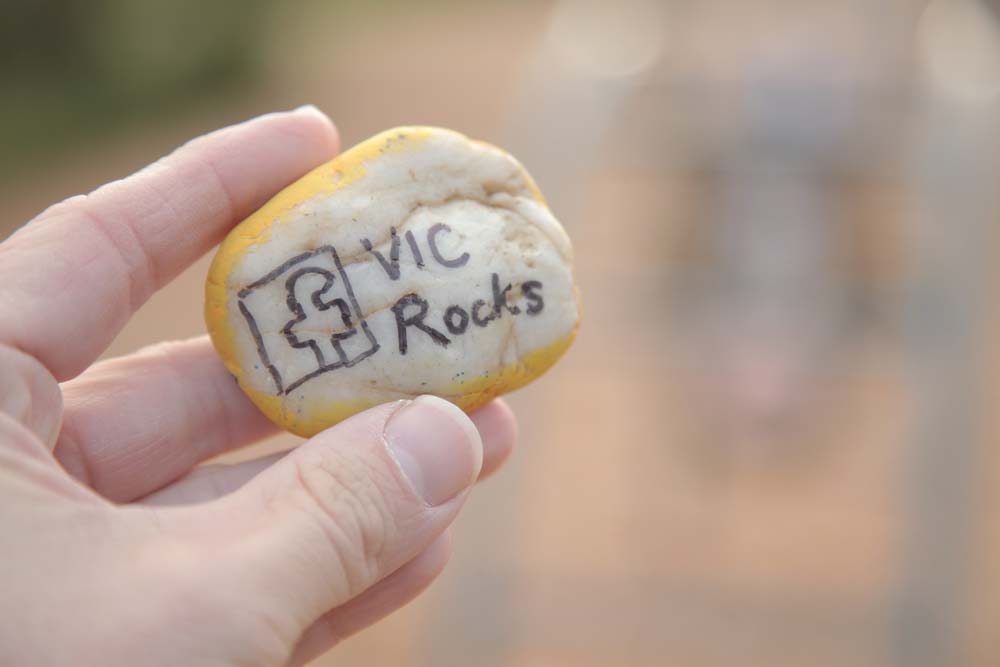 The wild, whistling winds of a bayside winter usually keep me huddled inside the house, sacrificing woollen mittens to the gods of summer in hopes that the golden rays of the sun will return early. But this year my family has been enticed into donning jackets and boots and hitting the grand outdoors in an epic rock session!

Have you heard about the rock painting and hiding craze that has hit Melbourne? Brought to our cultured city by the enthusiastic and arty team at Moongala Community House, in Bentleigh East, you are very likely to find beautifully, and colourfully painted rocks and stones hidden away in parks and public places Peninsula-wide. This is a crafty activity that you and your monkeys can take part in with minimal preparation and major fun.

The rock craze came about after Moongala’s Jude Rangitaawa decided to bring together people who were keen to get out of the house and try something different.

“The idea came from Facebook, I saw this was really popular in New Zealand and did some hunting and I couldn’t find anywhere in Australia that was doing this. We originally started a little group called Glen Eira Rocks to get it rolling, and now we’re putting all our energy towards VIC Rocks,” Jude said.

“I knew it was going to be a great community activity. When I saw it I thought it was a great concept, and I knew it would be awesome for getting kids out and about and off their devices. It gets people out to their parks and enjoying their environment. Loads of families are getting out now to hunt for rocks!”

Jude and the team at Moongala Community House are celebrating their first anniversary of organising these rock hunting romps, with the number of keen searchers growing all the time.

“In June last year we teamed up with WA Rocks, who were doing a really great job of it. We got on board with them and established ourselves as VIC Rocks. We’ve gone from 150 members at the start to over 21,000 now,” she said.

Keen to give it a go? First stop; search Facebook for “VIC Rocks” and check out the VIC Rocks page. It contains copious detail on exactly how to go about your painting, hiding and hunting. If you’ve got a question, chances are you’ll find the answer right here or just ask the page admins directly.

We invited our friends over to join in for the afternoon, with a big bundle of garden stones bought from a hardware store and a range of acrylic paint colours. The kids tend to dab their hands (and arms and clothes and faces and hair) into painting every week but it has been a while since us oldies had a chance to get artistic. And it was game on in the competitive stakes – we all dreamed up cool concepts, from Ken Done inspired 1980’s pattern work to a replica opal with gold seam. I like to think that my awkward rendition of Donatello from the Teenage Mutant Ninja Turtles is the one stone that will change the lives of whoever finds it for the better. Oh yeah, we also let the kids decorate a rock or two themselves.

The most important part of painting your rock is writing the Facebook symbol and “VIC Rocks” onto the back, so that anyone who finds it will be able to post a photo of their success.

Our children were split between wanting to hide their rocks and hunt for other peoples’ creations. This is what makes this activity so much more entertaining than, say, geocaching; it’s about giving a part of yourself to someone else as much as it is about the treasure hunt. We all walked down to our local play park and began seeking out the best places to secrete away our art-adorned rocks. The kids found the smartest hiding spots straight away, lodging their rocks in nooks of fallen logs and amongst the flowers. Challenging, but not impossible to find!

And as soon as the hiding was wrapped, it was onto the searching. Unfortunately, we did not have any luck ourselves although at least two of the munchkins re-found our own rocks for us. To avoid disappointment, you can search for your suburb or park name within the VIC Rocks Facebook page to see if anyone has hidden their rocks their recently, or to see if many have already been found.

And yet, even though we headed home empty-handed, we walked with pride and the knowledge that our rock surprises just might make some other children smile. All of our minis were so proud of the beautiful (and heavily abstract styled) rocks that they had painted and are already pestering us to get the brushes out and the geological hats on again very soon.

To find out all you need to know for your own family rock expedition, visit facebook.com/groups/VICROCKS

David Hawkins is a Peninsula based stay-at-home-dad who realised that he needed to improve his Dadding. So he set himself the simple task of being an Awesome Dad. He now challenges all dads to be awesome dads, by doing something out-of-the-ordinary with their kids.