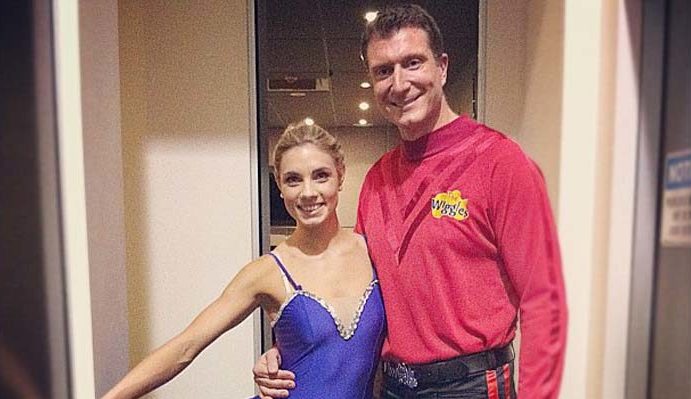 MPK CHATTED TO NEWLYWEDS SIMON PRYCE AND LAUREN HANNAFORD, ABOUT FINDING LOVE, LIFE ON THE ROAD, AND THE NEXT CHAPTER IN THEIR COLOURFUL LIVES. 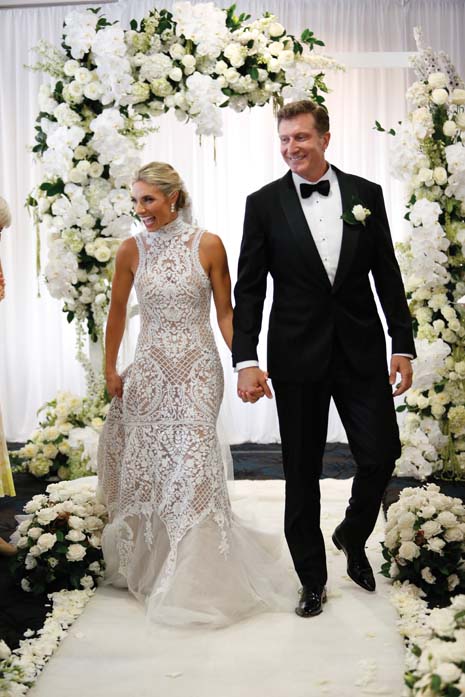 How did you both meet each other?

Lauren: We met each other working with The Wiggles. Simon was playing a character called ‘Ringo the Ringmaster’ and I was a gymnast/dancer.

Was it an instant connection or did you take a while before you started dating?

Lauren: We took a while before we started dating. We became good friends first. I would often train in between shows and Simon came up and asked me one day if he could train with me. From there our relationship grew and it has been based around health and fitness, friendship and love ever since.

Simon: What I immediately liked about Lauren was her beautiful smile, great sense of humour and amazing physical prowess, and of course how gorgeous she is.

Lauren: There is something about him that just makes you feel comfortable, safe and happy. And whilst he has such a strong and engaging presence about him, I immediately liked Simon’s kind and gentle nature. Plus he’s a babe, let’s be honest about that one!

How has it been working together with the Wiggles?

Lauren: We had a lot of fun working together with The Wiggles. We got to spend every day together travelling the world and experiencing new countries and cultures while doing what we love.

How did you both get involved with the Wiggles? Tell us about your backgrounds.

Lauren: I grew up as an elite gymnast and then went into coaching and personal training, so my role with The Wiggles pretty much came out of left field. Back in 2010, Anthony Wiggle’s children were doing classes at the gym where I was coaching. One day after seeing me work he approached me and asked if I was interested in performing with them, and within the next two days I was in their studios doing an audition and rehearsing for their next DVD and upcoming tour!

I then wasn’t due to start touring with the live shows until later that year, but when a dancer pulled out at the last minute, I found myself doing a very rushed packing job and hopping on a flight the next morning. It didn’t stop there either as Wiggling became my full time gig for the next 3 and a half years.

Simon: I had worked on and off for The Wiggles over many years doing a lot of backing vocals for them. My background is in TV and musical theatre and I’ve also worked for Opera Australia. I was doing Phantom of the Opera when The Wiggles contacted me and asked if I would be interested in playing the role of King John in a new TV series they were producing called The Kingdom of Paramithi. I said yes, and well – the rest is history.

Tell us about your engagement in Paris. What was that like? Were you nervous Simon? Did you expect him to pop the question Lauren?

Simon: Years earlier, Lauren and I had gone to a place in Paris called Sainte Chapelle and I had thought that would be the perfect place to ask Lauren to marry me. It has some of the most extensive 13th Century stained glass collections anywhere in the world and it’s just beautiful.

They perform orchestral concerts there and I had booked dinner and a concert. I had assumed that the dinner and concert were both in the chapel, but as it turned out dinner was across the road afterwards. Maybe their website is a little misleading. I had planned to do it after the concert and I wasn’t that nervous, I just felt a bit shy having to do it while there were hundreds of people hanging around after the show had finished. I waited as long as I could and kept pretending to want to take photos waiting for the room to clear. I then found a little quiet corner and proposed there.

The most nerve-wracking part was, earlier in the night when we arrived at Sainte Chapelle. Because of increased security there was an X-ray machine. I had to empty my pockets and of course I had the ring in there. I had to distract Lauren for as long as I could so she wouldn’t see it.

Lauren: Firstly, we love Paris, so Simon couldn’t have picked a better location. Poor Simon was so nervous about it, not nervous about the idea of getting engaged but nervous because he is actually really quite shy – so knowing he had to orchestrate this proposal in a room full of people was pretty nerve wracking for him.

We had talked about marriage for some time so we always knew we wanted to at some point, but I didn’t know it would be this particular occasion. We were trying to get a selfie together after the concert and, if I think about it now, Simon was acting a little out of character but I just thought it was because he was shy about taking a photo while people were still in there.

Can I just say that moment turned into much more than a lousy selfie and I couldn’t have been happier! And yes, he got down on one knee like the true gentleman that he is. Wow this is making me all soppy and emotional reliving those beautiful moments.

Tell us about your wedding day Lauren. Was it everything you had hoped for?

OH MY! It was absolutely everything we hoped for and more. There certainly weren’t enough hours in the day that day. We and our guests just wanted the evening to go on and on and on.

What is it like now being newlyweds and having so much time apart with the touring?

Lauren: It would be wonderful to be able to have more time together as we miss each other so much, but at the same time our time apart doesn’t change our relationship, who we are, or how we feel about each other. We continue to talk and communicate just as we would if we saw each other every day.

We just tend to really cherish and make the most of the time we have together when we do. Basically I don’t let go of Simon when I am near him. I’m like an over-excited golden retriever puppy. 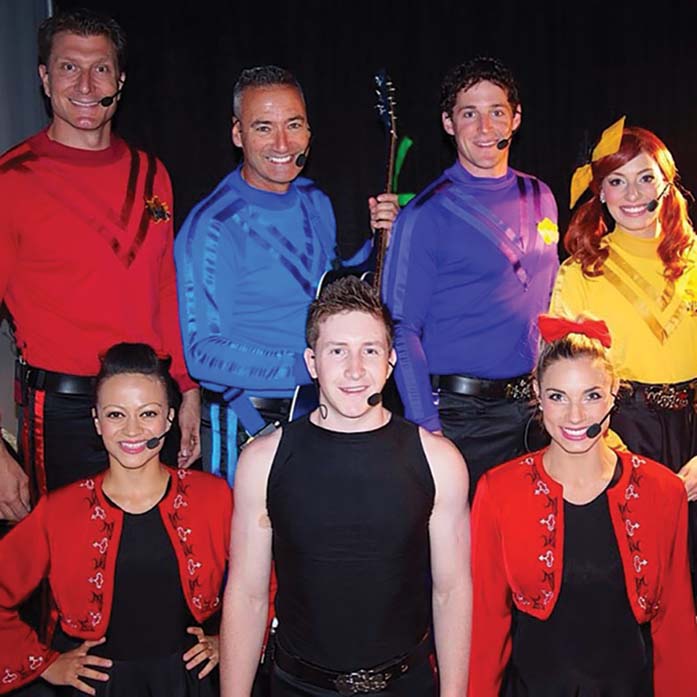 Simon, tell us about the upcoming tour, The Big Wiggly Christmas show, and how you got involved with the wiggles? What do you enjoy about being a Wiggle?

The Big Wiggly Christmas Show is our big arena show at the end of the year and it really is a celebration of the year, and of course Christmas. It is the tour we all look forward to the most; being at home in Australia performing and being home at Christmas time.

This year’s show is jammed packed full of all styles of music, singing and dancing – and of course Dorothy the Dinosaur, Wags the Dog, Henry the Octopus and Captain Feathersword will all be there. Rumour has it Santa Claus will pop by and say hi as well!

The thing I love the most about being a Wiggle is having the chance to put a smile on children’s faces. In particular, families who might be doing it a little tough with either sickness or children with special needs. Just having the opportunity to help make a little bit of a difference in a positive way is what I care about the most.

Lauren, tell us about your incredible fitness program FHIT and how it all evolved for you? How did you come up with the concept of the 15 minute workouts and who are they great for?

First of all, I am so excited that FHIT is here and that it is so easily accessible to everyone. We all want fitness and health to be easy, so the more accessible it is the easier it is to create a lifestyle from it.

The concept came when I was touring and had to be able to train anywhere at any time, and get a really great all over body workout using nothing but my own body weight. I started incorporating exercises I had always done growing up in the gymnasium as well as morphing some of those techniques into my own exercises so that I could continue to train anywhere.

When I stopped touring I had quite a number of people asking how I stay fit and healthy whilst being so busy all the time. Basically I took everyone’s different concerns along with my own experiences and created these fast and effective 15 minute online workouts. The one thing everyone has in common was that they are time poor… So from that, FHIT was born!

The key for me whilst creating this program was for the workouts to be interactive and encouraging. By creating these online streaming videos, it meant that people could experience the full version of class or personal training style workout in the comfort of their own home or wherever they have the time and space. I could ramble on and on about it because I am so passionate about it, but in a nutshell that was the evolution of FHIT.

Christmas Day usually starts with a swim in the ocean and then Simon will spend the morning until around lunch time with The Wiggles at the Randwick Children’s Hospital visiting all the children and families in the wards. The children who are in hospital on Christmas Day are usually the ones who are too sick to be able to get home for the day.

Then we will do the rounds and visit both our families. Everyone is now in Sydney so that makes things a little easier.

Christmas and New Year is usually a fairly quiet time for us as it’s a chance for Simon and I to spend time together. Being together is the only present we both need at Christmas time. (ok fine, maybe a new pair of runners as well.

Tickets for The Wiggles’ Wiggly Christmas Big Show! national end of year tour are on sale now at www.thewiggles.com.au