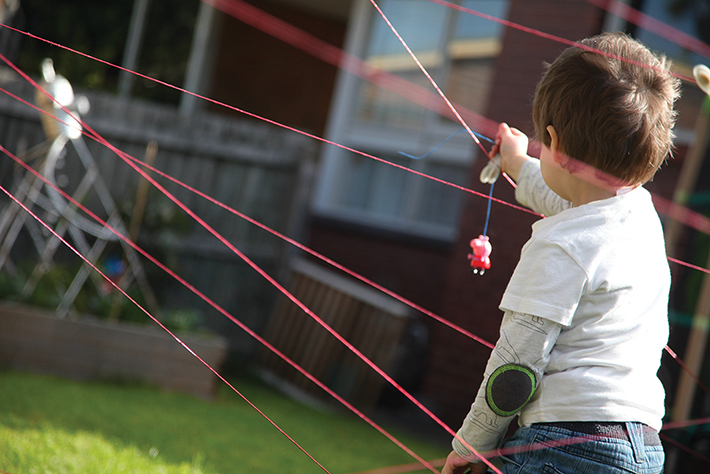 This was a loooooong winter and I fear that I may have gone a teeny bit cabin fever crazy because I began creeping around our house whistling the Mission Impossible theme tune and leaping out at Phenom-A-Mum from behind chairs saying “Sssssssh. Secret Squirrel!”. So what better way to celebrate the coming of spring than by smashing down the laundry door, bursting into the fresh air and putting Little E through his paces with a Super Spy String Laser Maze?

This is a well known activity that helps to develop your child’s gross motor *snore, snore, snore*… huh, wha’zat? Sorry, I talked myself to sleep with boring blah-talk when I should have said “It’s a crazy awesome tangle of fun”!

To get started, find somewhere that has lots of anchor points, otherwise known as places to loop the string. Our backyard is fairly sparse in an I-can’t-be-bothered-doing-it way, so I created my own anchor points by placing two garden chairs and a table parallel to the fence. This meant that I could run the string around the table legs and chairs, as well as pass it through the fence supports to create a Tunnel of Danger (hope you noticed the capitalisation there folks).

Cut off a really long piece of string and get to work weaving it back and forth like an unskilled and slightly visually impaired spider, as a Web of Doom (that’s right. Awesome) appears before your very eyes.

A word of advice: don’t make it too complicated if you are setting up for a toddler. I learned this the hard way when I got a little too into the weaving and found that only a newborn mosquito could find a hole in my web-work to squeeze through. Put in a few low strings to encourage the kids to step over and some higher ones to get them crawling.

The point of the game is for the kids to move through the string-web without touching the string, in award-winning impersonation of every spy from every film ever, who has to gymnastically navigate a criss-cross of deadly lasers or alarmed infrared beams.

Older kids will happily throw themselves into the maze for the just the challenge of it, to see who can get the furthest without triggering the alarm (or losing an arm to a laser!). However younger children, I discovered, couldn’t care less about the rules and required a little incentive to get them moving.

So I kidnapped the Pig family. Daddy, Mummy and Peppa Pig found themselves hauled from their beds in the middle of the night and strung up, dangling in a sea of laser beams. Once Little E found out about my ingenious pork-flavoured plan he leapt into action to save them… and totally ignored the challenge of avoiding the strings. His friend Mister L, who was visiting today, got more into it and kept asking for the poor pigs to be strung back up so that he could repeat his heroic rescues time and again.