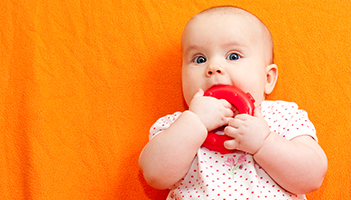 Teething can be a difficult time for both child and parent, waiting for that sharp pointy tooth to erupt, and everyone getting a good nights sleep can be the bane of any parent.

The first tooth will erupt at any age between four and 15 months of age, and then be followed by 19 more baby teeth over the next few years. Teething generally lasts up to eight days, four before the tooth emerges and three to four days afterwards.

Every parent has advice for other parents about teething; some based on facts, some on experience. Teething coincides with an age when children are weaning from breast-feeding receiving less protective antibodies from their mother and being exposed to more childhood infections. This has lead to teething being blamed for everything from increased drooling to convulsions and even death! In 19th century England 10 percent of childhood deaths were blamed on teething. Our ability to diagnose and treat problems in children has come a long way in the last 100 years so now we know teething isn’t as serious as all that… but what can it cause?

Teething can cause a variety of symptoms in some children, while other children experience no discomfort. Infants can experience any of the following: grumpiness, increased drooling, a rash around the mouth or red cheeks, loss of appetite and disturbed sleep. There is weak evidence that teething can also cause a mild fever or mild diarrhoea, but these symptoms are likely to be from other causes. It is important that your child is not experiencing something else such as a bacterial or viral infection, so a visit to your family GP or paediatrician is recommended.

There are things you can do to help relieve the discomfort and help your little one settle. Chewing on cold objects can be very soothing to the gums; there are commercial teething toys that are available but something as simple as a damp washcloth cooled in the fridge or rusks to chew on can do the trick. Don’t give them something from the freezer, as it’s too cold. Gently rubbing a clean finger over the gums can also help; this is helpful in the same way as rubbing your head after bumping it. Over the counter pain killers such as paracetamol (e.g. Children’s Panadol) or ibuprofen (e.g. Nurofen for Children) can be useful for pain relief. The skin around the mouth can become red and itchy from saliva so clearing away the drool regularly can help prevent this from occurring. And don’t forget good old cuddle therapy!

There are a few things to make sure you avoid for safety. Teething gels are a popular option to relieve the discomfort. There are however a couple of rare but significant risks with these. Some products contain topical anaesthetic medication (e.g. Benzocaine), which numbs the gums. These products are washed away by saliva quickly giving a limited effect but if applied too often can lead to a drug overdose. As this has happened to some families around the world most paediatric dental organisations no longer recommend their use.

Teething gels can also contain choline salicylate, a drug similar to Aspirin, as the active ingredient and are not recommended.

Amber teething necklaces have become a fad over the last few years, especially with Miranda Kerr’s son proudly displayed on the front cover of a popular magazine with one around his neck. The amber is thought to release succinic acid, a natural pain reliever, when in contact with warm skin. Their effectiveness is questionable but some parents think they help.

Be careful as the problem is some children will chew on the beads, which can be a choking risk because of their size, and the necklace itself is a strangulation risk.

Teething may be a terrible time for your bub but with a few simple actions to help it will be over before you know it.