The Lost World of Bayside Fossils 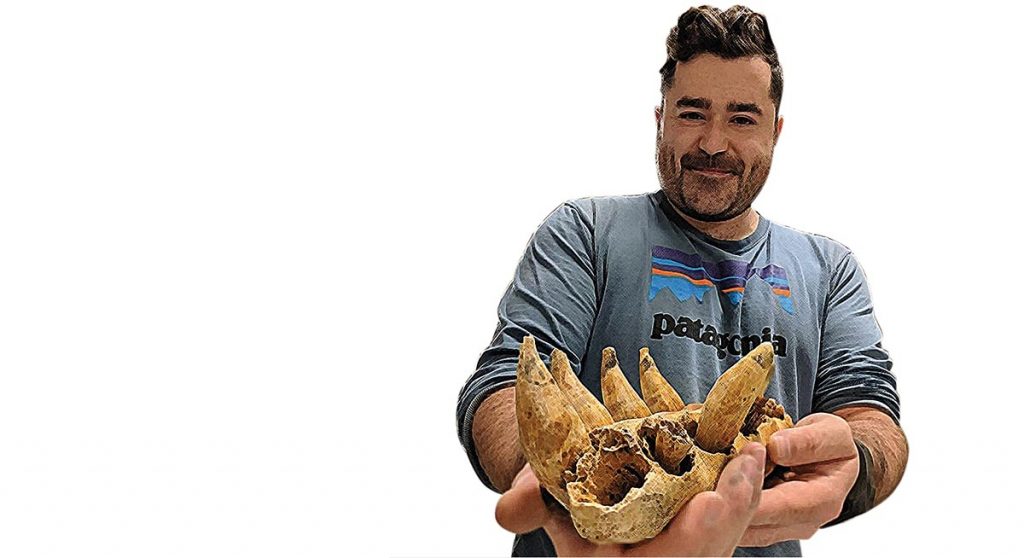 Prehistoric finds of the fossil kind are discovered on every continent, although you might not think of Melbourne Bayside as a significant site for palaeontology research. That’s why you need to hear about Ben Francischelli’s work. Ben is researching Australia’s most important urban fossil site, and it’s found right here in Melbourne.

Together with his team of citizen scientists and work colleagues, Ben has uncovered an extraordinary collection of prehistoric fossils from Beaumaris. Specimens such as sharks, whales and other sea creature fossils dating back some five million years.

Ben took some time out of his lockdown schedule to chat with us about his exciting Lost World of Bayside Fossils project that is sure to excite every member in your family.

Q. Hi Ben, when did you begin your path into palaeontology begin?

My path into palaeontology was not conventional. It all started when I was four years old when I was given a book about life before man.

As I grew older, I became interested in whales. I remember a time when I asked my school teacher “How big is the biggest whale” and he said “Ben, I want you to run down to the end of the basketball court and all the way back again. That’s the size of the blue whale” I’ll never forget that. After year 12, I went to university and studied environmental science, although I didn’t like it very much. I was more fixated on the living world, biology and evolution.

After that, I would travel down to Beaumaris as often as possible.

I started finding bones, shark teeth and fragments of seal skulls. After six months, I accumulated quite a collection and presented my finds to Senior Curator of Vertebrate Palaeontology Dr. Erich M.G. Fitzgerald at Museum Victoria. He was taken aback by what I had found and asked if I’d like to volunteer at the museum. All the curators and collection managers at the museum start as volunteers in order to get that in-depth knowledge.

I would go to the museum on a Friday every single week from 9 am to 7 pm, go through the drawers, speak to the other curators and absorb as much information as possible.

After finishing my degree, focussing on geology and biology, there was a job going as a Vertebrate Palaeontologist Preparator at the museum. This was the first time a job had come up in this field for a long time.

Q. Is it difficult to find work as a Palaeontologist?

Yes, it is. My boss Dr. Erich M.G. Fitzgerald was the first whale palaeontologist in Australia, ever. He was recently quoted in a newspaper, saying:

“It is harder to become a palaeontologist than an astronaut in Australia.”

I am very lucky to do this job, I absolutely adore it. To find these amazing specimens that have never been found before, and to work with some great people, is incredibly exciting.

I do have to constantly apply for funding, which is the issue that comes with science. Rejection is a big part of it. If the funding does not come, the Lost World of Bayside Fossils work cannot continue, and applying for funding can take a huge amount of time.

Q. How has COVID-19 affected your work?

COVID-19 has made things more difficult, not just for palaeontology, but for all science as a whole. We don’t quite know what will happen in 2021. Also, my favourite thing to do is to give talks and I haven’t been able to do any this year.

Q. Can you tell us about the discoveries you have uncovered in Bayside Melbourne?

Every single dive is yielding material that has some kind of scientific importance. Not just important in Bayside, not just in Melbourne but in Australian palaeo history as a whole.

Q. What equipment do you need to find fossils?

I free dive and walk on the seafloor. The most important tools we need to find specimens are our eyes – in the water and on the beaches.

I work with a team of people and the most valuable resources we have are volunteers looking for this material. When I started working on the Lost World of Bayside Fossils project, there were volunteers already involved in the work, finding fossils and donating to the museum. Some have been doing so for thirty years.

The team is finding fossils in water between 0.25 and 5 metres in depth, although it takes a special eye to find these fossils because they’re covered in algae. You must know the texture of whale bones or what the elements of a skull look like. Having that internal knowledge is what’s most useful.

Q. Why are the fossil sites in Bayside Melbourne so unique?

If you think of any other fossil site around the world, palaeontologists are using hammers and chisels. You don’t need that for Bayside.

This material erodes out naturally from the bottom of the seafloor.

Q. Tell us about some of your significant fossil finds in Bayside Melbourne

Just yesterday a paper was released documenting the seals of Beaumaris. Every single one of the seal fossils that we have found has been of significant importance.

What makes Beaumaris and Bayside unique is that it is an evolutionary melting pot for several unique animal lineages. This is a hub of history and helps us understand the evolution of whales. Bayside is the only place on the continent that you can find specimens of the largest bird that ever took to the sky – the “Pelagornis” with its bizarre pseudo-teeth. We found evidence of dugongs, of giant lumbering marsupials the size of cows and the predatory macroraptorial sperm whales.

Then there is the Megladon, the same size as a humpback whale, with 250 teeth, some the size of your hand! We’ve got evidence here of two top predators in an environment that we don’t see today – a bizarre ecological niche that has been preserved and not seen anywhere else in Australia. We can utilise these fossils to better understand their evolutionary origin.

This is one of the most unique fossil sites in all of Australia because it preserves so much diversity that we didn’t think was possible.

Part of the team found an interesting fossil in March 2020, the upper jaw of a beaked whale. The matching segment of this specimen was found in 1977 and was the oldest evidence of beaked whales in Australia.

Q. What is your favourite fossil find?

My favourite fossil, although not one that I found, is the predatory macroraptorial sperm whale tooth that was found by a colleague on the beach in Beaumaris in 2016. This is the youngest evidence of these killer sperm whales on the planet. For me, the Megladon tooth that I found in 2018 was pretty special because they are very rare.

We managed to find a new site in Bayside thanks to our citizen scientist team. While in the water I found a dense horseshoe-like bone sticking out. I lifted it out of the sand only to discover it to be a tooth the size of my hand.

Q. Tell us about the first fossil you found.

It was a specimen that I found in 2010, representing part of a skull of an ancient group of seals that no longer exist today. These seals were much, much smaller than those you would find today.

Q. At what locations have you conducted studies other than Bayside?

In 2017-2018 we led several expeditions down to the Surf Coast – Jan Juc, Torquay and Bells Beach. We had a lot of success. We found evidence of animals dating back 25 million years with bits of skulls and articulated pieces. These specimens re-write what we understand of the evolution of these animals.

Q. If you could travel anywhere in the world to look for fossils, where would it be?

If I could visit any geological formation in the world, it would be the Pisco Formation in Peru. It’s a giant desert that dates back around nine million years and all you do to find things is look for a blip in the sand. Usually, when you find a blip you’ll find a skull. It’s where they found the very first specimen of macro-raptorial sperm whale.

Q. What do you think of the Jurassic Park and Jurassic World franchise?

I grew up with Jurassic Park. We all love Jurassic Park and thought it was the greatest movie of all time. Then Jurassic World came around. We were all very excited to see it. A group of us, a number of palaeontologists, booked to watch it at IMAX, and well.. we all completely hated it! It was so inaccurate. We would look at it and say “Who would design a Pterosaur like that”; it looked more like a winged bat than anything. There were so many inconsistencies; that was the most frustrating thing. The story was fine but it was how these animals were portrayed. I was sitting next to one of my colleagues who works with Sauropods and, well, I thought he was going to throw his popcorn at the screen.

The original Jurassic Park in 1993 opened up an entire new world of palaeontology, whereas the newest films are not focussing on the palaeontology; they’re more about the shock factor.”

Why do you have to make a new dinosaur? There are so many interesting dinosaurs that are already out there like the Therizinosaurus with its huge scythe-like fingers that are more than a metre in length or the Physeter, the largest toothed predator.

Q. Will we be able see some of your work?

Our hope is that when we can, and when it is safe to do so, we will hold an exhibition of the fossil specimens that we have found, and we will be able to show what we’ve been up to.

Erica hails from the United Kingdom, and has been living in Australia for 15 years. She has two sons 7 & 12 years. She writes, edits and runs the social media pages for KidTown Melbourne, a website showcasing all the fun things to do with kids in Melbourne.