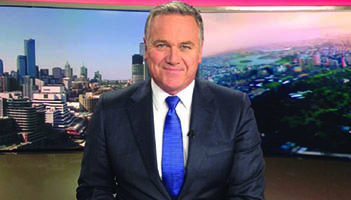 FROM NEWS REPORTING TO RAISING KIDS, PETER MITCHELL NEVER TAKES ANYTHING FOR GRANTED, CONTINUALLY LEARNING LESSONS ALONG THE WAY
BY: MELISSA WALSH

Channel Seven’s top newsreader, Peter Mitchell is also the father of five children, and grandfather of three. The 55-year-old, who was born and bred on the Mornington Peninsula, began his news career at the Nine Network in 1977 as a sports reporter and became a general news reporter five years later. He made the move to Channel Seven in 1987, where he has been weeknight news presenter for the past 15 years.

Mitchell says balancing work and family life has been relatively smooth as his wife, Philippa, and children have always kept him grounded. “It’s great to go home after you have had to deal with the TV news as it’s not always a pretty picture. Some of it is quite heavy and a lot of it involves children, which is close to my heart. Going home to my children when they were young was a great relief. They didn’t watch the news and to them I was just dad,” says Mitchell, whose children now range from 31 down to 12.

So far none of the kids have shown any interest in journalism, although his eldest daughter has her own blog. “The younger three are still at a local school which is where I spent my last two years of high school. My wife and I love it down here and we have always lived on the peninsula. We decided it was a great place to raise children, so I have always just chosen to commute to work,” says Mitchell. “It’s the quality of living down here and my job allows me to leave home late in the morning on average days, so I avoidpeak traffic most of the time.”

And just like a regular family, Peter says that they too face the everyday issues of raising children in a technology driven society. “It’s a completely different situation from the way we were raised with getting outdoors. These days with the amount of gadgets the kids have we have to be hard on them. There’s so much peer pressure but we have a blanket rule that no gadgets are allowed in bedrooms when it’s time for bed. Everyone has to hand in their iPhones and iPads. Philippa and I stress the importance of getting a good nights sleep,” he says. “As husband and wife, it’s a battle sometimes but we always try and tackle any situations with the kids together. We know that so many bad things can happen particularly with technology that we tryand oversee everything. Sometimes it works, other times it doesn’t. It’s constantly a learning experience.”

After all these years of raising children, Peter says the best policy is to be open and honest. “We try to always sit down and be honest with our kids, and teach them to treat people as they want to be treated. Communication is the key and to not be deceptive. If something’s on your mind you have to talk about it.”

With a house full of teenagers, he says that at times they have had to resort to padlocks on the panty so the food supply lasts. “Teenage appetites are crazy. You can lose a loaf of bread in one sitting,” he says with a laugh.

Being young grandparents while still having school aged children has been an interesting experience for the couple but it has all fallen into place. “Raising children and being a youngish grandfather meant my youngest son was an uncle at the age of eight, but all the relationships level out. Everyone gets on really well, and when the family all get together, Philippa and I sit back and are extremely proud of them,” he says.

In the Mitchell household, father’s day is always a big one. “Not commercially, but it’s an opportunity for us all to be together. Birthdays and Christmas are like that too, but not so much Easter as our focus is on the Good Friday Appeal,” he says.

A most memorable time when the family was all together was also one of the saddest occasions, when they travelled down to Warrnambool to scatter his father’s ashes. “My father had requested his ashes be spread off the Warrnambool breakwater and so we all travelled down there. The day we took his ashes we stayed overnight and it was a wonderful time being together and bonding. It was all due to thinking about how life moves on so quickly,” he says.

As for being a grandfather, Mitchell says it is wonderful. “The children are terrific and it’s amazing to see my eldest daughter doing what my wife did. She soaked up all of this experience from her mother and uses a lot of the same tactics as we used to,” he says. “It also makes you understand that these are generations and that this is why we are here. I thought immediately of my grandfather although I never met him, how he must have felt when I was born. It puts everything into perspective.”

Peter and his wife, Philippa, live with their three youngest children on the Mornington Peninsula.

As published in the Peninsula Kids Magazine, Summer 15/16 Edition. Want to read more? Click here for the online version.