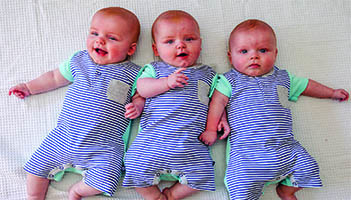 A year ago Mt Martha couple Leah and Ben had no idea that their world would soon be turned upside down. The 23 year olds were living at Ben’s parents and saving madly for an overseas trip. But, as John Lennon said ‘life’s what happens while you’re busy making other plans’ and before they knew it they found out Leah was expecting a baby. Well that’s what they thought at first but at Leah’s six-week check-up the obstetrician said she was actually pregnant with twins. Two weeks later, they found out it was triplets. Now the family of two is a family of five, with their six-month-old triplets, Byron, Chevy and Reef born on April 28.

“The whole thing has been a whirlwind from start to finish,” said bubbly blonde Leah, of the crazy ride she and Ben have found themselves on. “The pregnancy was a complete surprise but one that we were so happy about. We were ready to be parents but having three at once has been full on.”

Carrying three babies meant that Leah would start showing very quickly. By the time she was 10 weeks she had a definite belly, and at 15 weeks, looked very pregnant. “At 19 weeks, the weight of the pregnancy and carrying three babies started to take its toll. I was having strong Braxton hicks contractions and other issues. My body had already started to break down,” said Leah, explaining that they were always aware that although she had conceived three babies, it was highly possible not all of them would survive.

“I was hospitalised around that time for a few days because I was having small contractions. As soon as I got out I finished up at work. I spent time resting around the house in between lots of doctors and hospital visits. When you have multiple births like this, you have to be monitored regularly so I was often at the Bays Hospital seeing my obstetrician, although I was always going to deliver at Monash Medical Centre,” she said.

At 28 weeks, Leah woke up and had lost a lot of fluid. Her membrane had ruptured and it was highly likely labour would not be far behind. “I was at the Bays Hospital in Mornington and quickly transferred to Monash Medical Centre where I was given steroids for the boys’ lungs. I was three centimetres dilated, and Byron had already started to descend the birth canal so we knew that he had to be born naturally.

I lasted for two weeks and five days longer and then woke up one morning at 9am and had gone into labour,” she said. “It all happened so quickly. They took me into the delivery suite and at 10.40am Byron was born, weighing 1300 grams. There were surgeons on standby for a caesarean section for the other two but my obstetrician, Kelly Griffin, was there and was able to deliver them naturally,” said Leah. Twelve minutes later, Chevy was born, weighing 1720 grams, and getting stuck on the way, which fractured his humerus. Within three more minutes, the youngest, Reef was born at 1543 grams.

After seven weeks, the babies were home from hospital and soon days and nights became a blur of nappies, feeds, sleeps and cuddles. “We go through about 20 nappies a day, and about 18 bottles although they have started on solids now and that’s an interesting time trying to spoon feed three babies,” she says with a laugh. When the couple first got the babies home, they were so used to the sound of monitors in the hospital they needed noise to settle. “Ben and I decided to set their cot up in the lounge room with a light on and music on the tv,” said Leah. “The three of them slept in the one cot and they loved it.”

While the dream of London and travel is a far way off at the moment, Leah says they wouldn’t have it any other way. “We are so happy with our babies, watching them grow and seeing their different personalities. Byron and Chevy smile and laugh all the time, while Reef is a lot more serious. I know this is not what we had planned but I wouldn’t change a thing.

As published in the Peninsula Kids Magazine, Summer 15/16 Edition. Want to read more? Click here for the online version.